Who's No. 1? GfK Says Samsung While Counterpoint, Canalys Say Xiaomi

While Counterpoint and Canalys ranked Xiaomi as the number one player based on just shipment figures, GFK positioned Samsung as the leader by tracking end consumer sales.

Samsung has been the Indian mobile phone market leader for quite some time and that too by a huge margin. A couple of years ago, Samsung used to dominate the Indian smartphone market by over 20 percent market share while its competitors struggled in the under 5 percent category. So, all of a sudden if a brand like Xiaomi, which is less than five years old in India, claims to dethrone Samsung, then it’s of course a big deal.

WATCH VIDEO: Microsoft Xbox One X | All You Need to Know

But the story to glory is not that simple. The only way, apparently, for brands to know their position in the Indian market is to refer to ‘Quarterly Market Tracker’ reports by research firms like IDC, Counterpoint, Canalys or GfK. It is immensely difficult to accurately determine which company sold how many units of which handset, for obvious reasons. While some firms count shipment numbers others claim exact sales figures. Also, different research firms apply different mathematics to determine the ranking.

Determining the actually ranking is always difficult with so many prominent smartphone brands in India. While Counterpoint and Canalys ranked Xiaomi as the number one player based on just shipment figures, GFK positioned Samsung as the leader by tracking end consumer sales.

“As per GfK, which tracks sales to end consumers in the last (November) quarter Samsung had a 45% value market share and 40% volume market share,” said Samsung in a statement.

Counterpoint, on the other hand, said that Xiaomi’s smartphone market share in India is 25 percent in the fourth quarter ahead of Samsung's 23 percent. These figures are just based on shipments, not end consumer sales. Canalys, which also tracks shipments, said that Xiaomi had shipped 82 lakh smartphone units in the fourth quarter while Samsung shipped 73 lakh smartphone units. “Canalys estimates Xiaomi has 27 percent of the Indian market while Samsung is on 25 percent,” according to Reuters. 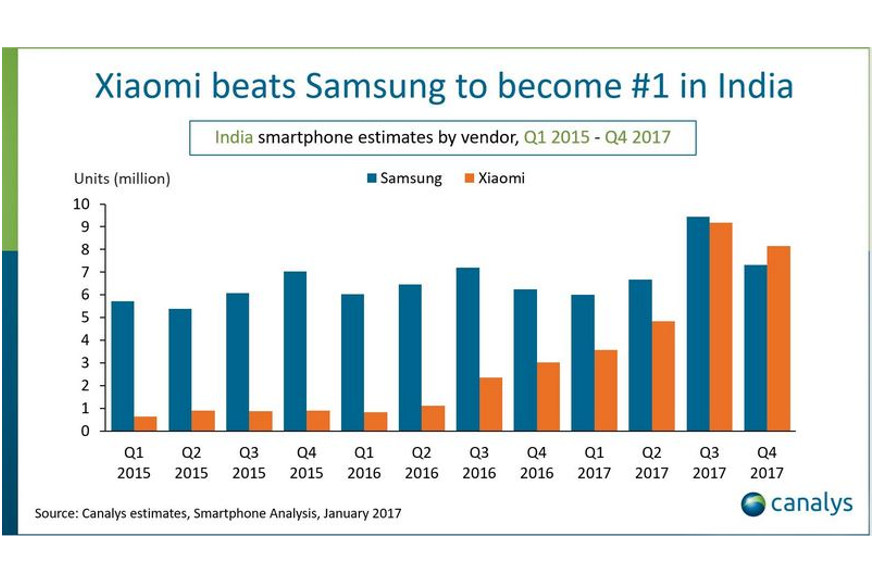 While both the brands fight for the “India’s number 1 smartphone company” title with the shipments versus actual sales figures, the reports hint that the demand for budget phones under Rs 12,000 is at an all-time high. More and more consumers are not willing to spend much on smartphones thus maintaining margins would be difficult for brands which only focus on the budget range.

As far as consumers are concerned, the purchase decision has been mostly about the quality and performance of a particular handset and the after sales service of the brand. The title of “India’s number 1 smartphone company” sounds good in advertisements but might not help much while making purchase decisions. Thanks to smarter buyers.