Why 'Freely Available' Geospatial Data is Crucial For Development [An Insight]

Geospatial technology plays a vital role in our everyday lives now, because of its vast applications that run right down to the grass root level. What will be the result if more of such location-based data is available for the society to work upon? Here is what the geospatial experts from across the globe think about this.

Remember how Mr. GPS brought the GPS technology to your smartphones? The struggle to develop on location-based technology has now become a life-long work of an entire race of people. The reason is simple, its applications are almost everywhere, right from tracking to navigation, advertising, disaster prevention and even games. You name it and there is probably an organisation out there working on using the locational technology for the same. The scope still seems to be limitless though.

For instance, homegrown organisations ISRO and NRSC collaboratively launched the Bhuvan app which, as for its latest boon, is helping fishermen in Kerala navigate deep into the ocean [even up to the distances of 180 nautical miles] to know the right location to catch fish through a simple ‘compass’ interface. On the counterpart, private players have made possible calling a cab to your location right from your phone. The technology has also opened up possibilities which were no more than distant ideas previously. Self-driving vehicles are a very good example of that.

But how does it work?

The end-to-end process is mostly a collaborative effort. In the above examples, ISRO satellite is the one collecting the location-based data, which NRSC then converts into user-interactive apps for various purposes. Similarly, Uber, Google Maps, Google Earth get their satellite imagery data from DigitalGlobe, an American vendor of space data, and then use it to create their own specific applications.

Now here is the catch

The collection of location-based data is possible only for big players, be it private or public, for obvious reasons, like the cost involved. The ‘applications’ part, however, is not as restrictive.

Shelter Associates, an Indian civil society organization, under its ‘One Home One Toilet’ initiative, was able to ‘map more than 200,000 households, helping 9,000 people improve their housing and more than 105,000 people get access to improved sanitation’ using data provided by Google Earth Outreach. Numerous such examples have emerged over time wherein SMBs and organisations at the grassroot level have used location-based data for offering a solution to the community. 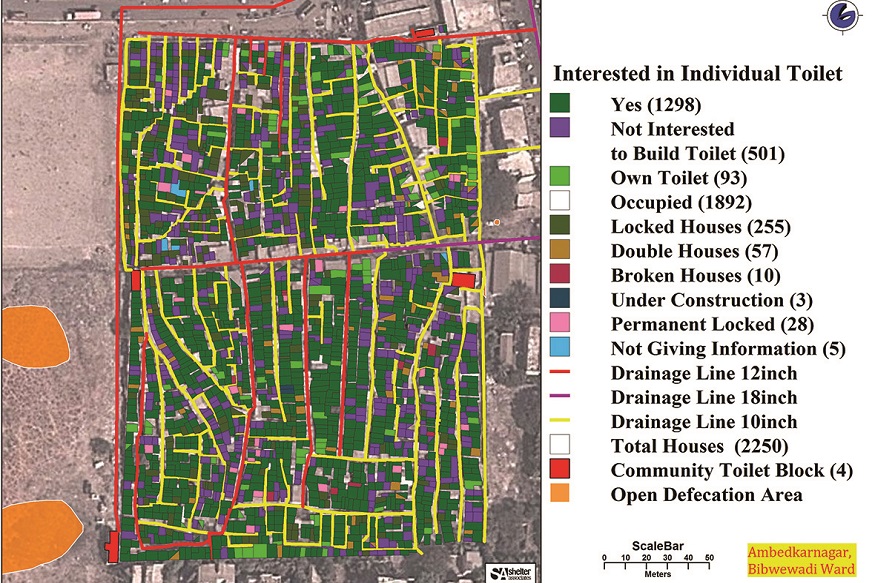 There is an entire community, closely knit with geospatial technology, propagating the agenda that if the gathered location data is more openly available to everyone, its implementation for the betterment of human lives can be enhanced multifold.

One of the top entities in this race, is Group on Earth Observations (GEO), an international organisation designed by the industrialised nations back in 2005. We managed to interact with the Secretariat Director of GEO, Barbara J. Ryan, arguably the biggest promoter of broadly available location-based data. She mentions the advantages of making data available freely.

Anne Hale Miglarese is another hero without a cape working towards this goal. Heading Radiant Earth as its CEO, Anne mentions how the initiative backed by Gates Foundation and Omidyar Network is utilising the earth observation data.

“Radiant Earth is working on projects including those of sanitation and waste treatment in Senegal, disease eradication [polio in particular] in Cambodia and many other such projects using earth observation data and land radar data.” There is not just a social value attached to broadly available geospatial data. For a nation, the data can prove to be a big boost to its economy. At the very least, the simple equation between the employment rate and the economy comes into effect. Barbara explains how:

“If the governments make their data broadly available, then small startups and even big companies could come in and build value-added products and services. That’s how the economy grows because jobs are readily made available due to this.”

And that is just one immediately visible impact of this economic boost. If we think of all the “value-added services” mentioned above, their scope is huge, again, because of the wide number of applications of GIS technology.

We don’t need to stray far from home to see the impact. Dr Harsh Vardhan, Minister of Science & Technology in his keynote speech at the Geospatial World Forum 2018 mentioned how India is benefitting from the technology:

“Use of space and location technologies adds thousands of crores to the country’s GDP. Geospatial is no more a fundamental science; it has become a solutions science. Space technologies enable and connect 32 ministries in India, complementing each other’s work.”

No one organisation can completely take on the task of utilising geospatial data on ground level. A recent example of the importance of working collaboratively was mentioned by Dr Y.V.N. Krishna Murthy, NRSC Director, at the GWF 2018.

“Since long, NRSC has been giving the heat wave predictions 3 days in advance. From the past 3 years, the first two years saw significant deaths due to heat wave in the region of Telangana, Andhra Pradesh and Orissa. But last year, by linking the communication network, i.e. the Telangana state transponders with the cable operators, any death due to heat waves was avoided in the region.”

A MoU between the Ministry of Railways and ISRO, signed back in 2016, is also a big accreditation to this. As per the MoU, Ministry of Railways wished to use space technology for remote sensing applications across the Indian railway network. The technology could potentially help with passenger information system, real-time train tracking, surveying new rail routes, conducting track vulnerability research, mapping Railway assets and much more.

So essentially, even though India can boast of having one of the top space agencies around the globe in its arsenal, the practical implementation of the data at the ground level is a concern involving many other organisations. The data in itself, no matter how much, will not help.

Despite its perks, there are only a limited number of governments currently sharing their acquired geospatial data publicly. Is there a technological restriction to it? No, says Barbara Ryan: