Home » News » Tech » 'Will I get a free Windows 10 upgrade?' This flowchart has the answer
1-MIN READ

'Will I get a free Windows 10 upgrade?' This flowchart has the answer

Microsoft Windows 10 OS includes a host of brand new features and is set for a July 29 release. This flowchart explains who all will get the upgrade for free.

New Delhi: Microsoft announced its next Windows operating system and you thought laying your hands on it was easy? Add to it the company’s constant tweaks to its free upgrade criteria and suddenly Windows 10 seemed like one rare and precious stone- everyone wants it, but not everyone can afford it.

The next OS, which includes a host of brand new features, is set for a July 29 release. However, there have been constant changes to the way it will eventually land in the hands of the consumers. From an earlier free-for-all policy to the one which let only genuine Windows users acquire the upgrade for free, to an even more confusing free-for-previewers policy and its immediate rollback; the blurry details don’t seem to end.

Whether you run a genuine Windows version (Windows 7, 8.1, Vista or XP), currently using the Windows 10 preview, have been running the counterfeit versions of the operating system, or will be required to shell out a minimum of $119 for the standard edition, this flowchart by Lifehacker answers the ‘who gets the free Windows 10 upgrade’ question with utmost precision. 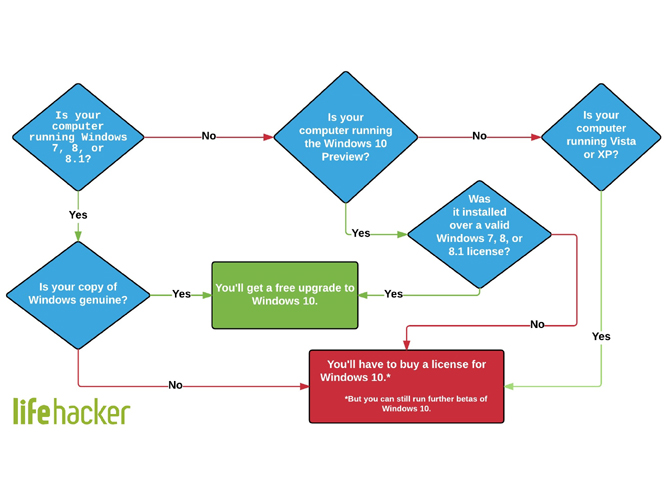 PS- This flowchart is valid till Microsoft doesn’t announce further changes to its offering prior to the official launch of Windows 10.