Xiaomi Mi 10 Review: This Underrated Android Flagship Phone is Going to Surprise You

Xiaomi's premium offering has all the muscles to compete with almost any smartphone in its price range, including the OnePlus 8.

Kunal Khullar
Xiaomi is taking a stab at the premium smartphone market again. It had been a while since they last did, and while the timing can always be debated, what Xiaomi has going for it right now is a great product to attempt that journey again. The Xiaomi Mi 10, which is an Android flagship smartphone in every possible way. It had indeed been quite a long wait since the Mi 5 in 2016, and quite frankly, the Android smartphone market needs this right now. A fresh perspective on Android phones, a new option for customers and in a way push the rivals to up their game as well. The Mi 10 prices start at Rs 49,999. And it is joining the club that was so far pretty much the territory of Samsung, with the Galaxy S20 series and OnePlus, with the new OnePlus 8 Pro. Competition is going to be tough, and the Xiaomi Mi 10 has the tools in its arsenal to very much be a part of this.

It is not just about the product though. The Mi 10 also has the responsibility of changing the long-standing perception that people have about Xiaomi's phones and the affordability tag that is immediately attached. In the long run, the Mi 10's efforts now will reap rich rewards for Xiaomi, assuming they will push on and persist with the Android smartphone game in the years to come.

Xiaomi might be known for its affordable, value for money devices all this while, but at the same time it isn't a brand that shies away when it comes to premium design. If you remember the Mi Mix, it was one of the first smartphones with a seamless, no notch, no hole-punch display. More recently the company showcased the Mi Mix Alpha, a fully functional smartphone that comes with a unique display that covers the front and back of the device.

Now the Mi 10 doesn’t necessarily stand out, but it is as premium as it gets. There’s a polished glass at the back with a vertical camera system and a curved display with a hole-punch at the front. It is a large phone despite having slim bezels and feels a bit on the heavy side with a weight of 208-grams. It is also a slippery device and obviously prone to fingerprints. But all of these nitpicks aren’t necessarily a deal-breaker. Xiaomi is offering two colour options, the stunning Coral Green and a more subtle Twilight Grey, which is the one they sent over for testing.

The volume rocker and power button offer a nice feedback, and while there is no headphone jack on this phone (one of the few Xiaomi smartphones) you do get a 3.5mm adapter in the box. The SIM card tray, USB-C port and one of the dual speakers are at the bottom while at the top there is an identical speaker and an infrared blaster as well. Now there is no IP68 certification on the handset, but there is P2i coating meaning that it should withstand light water splashes and sweat.

Overall, the Mi 10 is a fine example of how premium a smartphone in the affordable flagship category should look like. It doesn’t seem that Xiaomi has cut any corners, and that’s what is expected of a phone priced at Rs 50,000.

The Mi 10 sports a 6.67-inch Super AMOLED display which is claimed to offer a typical brightness of 500-nits going up till 1,120-nits. While that sounds impressive in itself, there is also the option of a 90Hz refresh rate. Sure, this isn’t a 2K resolution panel, but that doesn’t necessarily mean poor sharpness, and it also good for battery life.

Compared to the OnePlus 8, the display is equally matched in terms of colour reproduction and brightness. It looks great even under direct sunlight and can definitely go quite low when using the phone at night. Yes, there is an option for DC dimming as well as various colour and saturation tweaks. It also feels really smooth and responsive, especially at 90Hz refresh rate giving an apparent boost in the performance. The display brightness is a little disoriented but only at the edges where the screen curves, but that is only visible at certain angles. Speaking of the curved edges, I am not a huge fan. It isn’t as subtle as the Samsung Galaxy S20 series or the OnePlus 8, but I guess one gets used to it after a few days of usage. The punch hole sits on the top left corner to house the front camera, and again it looks as big as the one on the OnePlus 8. It isn’t distracting and I never found this sort of arrangement to nudge into day to day usage. 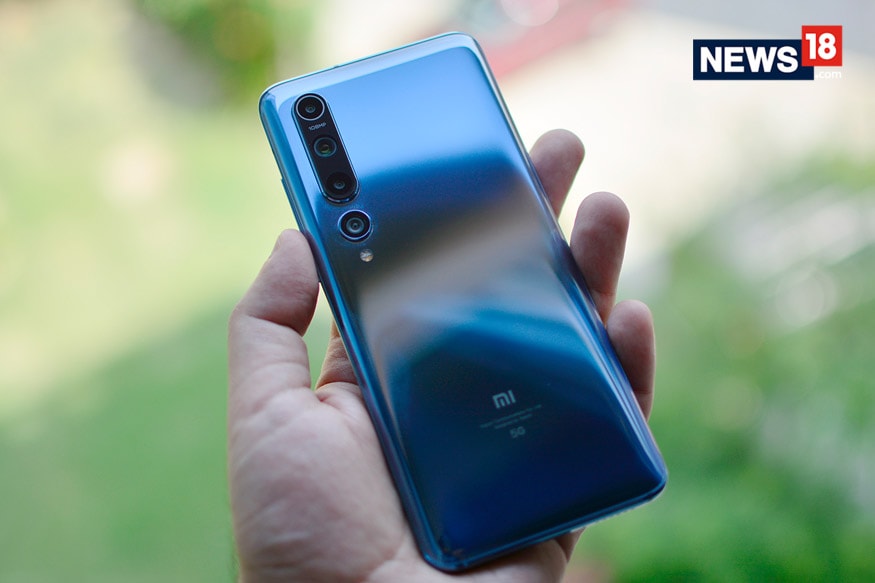 At its price, I believe Xiaomi is offering a very premium display. The only other phone that can match up, at its price range, is clearly the OnePlus 8.

There are no qualms when it comes to performance as Xiaomi has used the top of the line Qualcomm Snapdragon 865 along with 8GB of RAM. The company is using the latest LPDDR5 standard and you get 128GB of UFS 3.0 storage. Notably, there is no storage expansion, which has become a norm on phones priced Rs 30,000 and above these days.

The hardware is top-notch, and leads to a smooth, stutter free experience. Adding to the prowess is support for Wi-Fi 6 and 5G. While the latter might be irrelevant right now, having support for the latest Wi-Fi standards is good to see. Xiaomi says that it is using special layers of graphite, graphene, as well as a vapour chamber to keep the internals cool. That is necessary since the CPU can run at blistering speeds of 2.8Ghz.

Now notably, the special cooling hasn’t worked out very well. Under heavy loads, like gaming or extensive use of the camera, the phone does get really hot. It is the same case when you are charging the phone. Now of course if you don’t live in a place where the temperatures go up to 40-degrees, you might not face heating issues as much as I did. But the fact is, the internal cooling efforts by Xiaomi could have been better. Having said that, you shouldn’t notice any performance throttling when it comes to the overall performance on the phone. Even gaming seems to be handled very well by the smartphone. Be it Ludo King, or resource-intensive PUBG Mobile, the Mi 10 can handle it all with ease.

This brings me to the OS. The handset runs on Android 10 with MIUI 11, which hasn’t been the best Android UI you can rely on. MIUI has been criticised for being plagued with ads and unnecessary notification spams. The company, however, says that the Mi 10 comes with a ‘premium’ Android experience and that there is no bloatware or anything that the user would not need. Now apps like Mi Music, Mi Video, Themes and GetApps do come preinstalled and yes, they are a source of intrusive notifications. Thankfully I was able to completely block them out and ended with absolutely zero spams, ads or notifications.

The experience is similar to what you get on most Xiaomi devices, however, there are some subtle changes. For instance, some of the default apps have been replaced by Google's, including the phone dialler, SMS app, and even the default browser app. Also, if you don’t like the homescreen style and prefer an app drawer, you can always install Poco Launcher as it works flawlessly.

The Mi 10 boasts of a 108-megapixel sensor which is something that no other phone in its range offers. There is the Samsung Galaxy S20 Ultra, but that costs way more than the Mi 10. It is a large 1/1.33-inch sensor along with an f/1.7 aperture lens and optical image stabilisation. There is also a 13-megapixel ultra-wide camera with an f/2.4 aperture lens and two 2-megapixel sensors for macro photography and depth sensing. For some odd reason, Xiaomi has decided to not use a dedicated telephoto camera, which was disappointing.

The camera shoots at 25-megapixels by default, unless you turn on the 108-megapixel mode. There is also 10x digital zoom and 2x zoom when using the high-resolution mode. The high-res mode definitely captures a good amount of details and accurate colours in daylight conditions. I found the pictures to have a good dynamic range, and by default a nice natural looking depth of field. Of course, I do advise to turn off the AI feature which overprocesses the picture on certain occasions. The digital zoom is fairly effective but in certain cases the 10x zoom didn’t prove to be entirely effective. There is also a night mode which is great to have as it does help in low light conditions, but results are just about usable as there is a visible loss in details.

The ultra-wide camera is of no use when shooting indoors or in low light, but it does work well when you are out shooting landscapes during daylight. Then macro camera is pretty pointless as I hardly got any good pictures from it, and I honestly refuse to understand why manufacturers are actually using such low-resolution cameras on such high-end smartphones.

In the video department, the Mi 10 allows you to shoot 4K videos at 60fps along with OIS and can even go out to shoot 8K videos at 30fps with digital stabilisation. Video recording is probably one of the best features of the camera as I was quite impressed with the 4K footage. Xiaomi is also offering a variety of manual controls as well as the ability to shoot in LOG profile. This is basically a flat colour profile offering a wide dynamic and tonal range, so you get a wider choice when post processing the video.

The Mi 10 packs a 4,780mAh battery that easily lasts all day on moderate usage. On heavy usage, you would be running for the charger at least once a day as the bright, high-refresh-rate display takes a toll on the battery. I got a screen on time of about 5 hours although if you switch off the always-on display and lower down the refresh rate, this can extend to 6 to 6.5 hours.

As for charging, the Mi 10 comes with 30W fast wired and wireless charging. Of course, while the wireless charger costs an extra Rs 2,300, a 33W wall charger is bundled in the box. The wired charger can charge the phone from 0-50% in about 35 minutes while the battery hits 100% a little over an hour.

The Mi 10 excels in a variety of areas with little to no compromise. I think for me, the camera and display are the two top features on this phone followed by the fact you get wireless charging along with 30W fast wired charging. The device is built very well, offers smooth performance and is quite capable of being the best phone at Rs 50,000. Xiaomi’s interface has been a topic of debate for a while now, and while it has been tuned down, I would’ve loved a stock Android experience.

The only other phone that comes close to the Mi 10 is the OnePlus 8, which offers everything that the Mi 10 does, with a slightly inferior camera but a way better software experience.
Tags