Xiaomi Mi 10 to Launch on February 13: Here’s Everything We Know so Far

The new Mi 10 series will be launched in China on February 13.

The Mi 10 series has been making strides on the internet for a while now, and we finally have a launch date. Xiaomi will be unveiling the new Mi 10 and Mi 10 Pro in China this week ahead of MWC 2020. The Mi 10 is going to be really important for Xiaomi as it will be the top of the line flagship for 2020. It will go on to compete against the likes of the Samsung Galaxy S20 series, the OnePlus 8 and other flagships marked for a 2020 release.

Like most flagship phones, almost every single detail about the phone has leaked online. So it was natural for us to compile everything we know about the Mi 10 so far.

Some early hands-on images of the Mi 10 have leaked in the past confirming that the Mi 10 Pro 5G would feature a glass finish on the front and back, no headphone jack and a quad-camera setup at the back. We also saw that the handset was bundled with a 65W charger in the box.

One of the more recent leaks includes press renders of the upcoming Mi 10 series. Both the Mi 10 and Mi 10 Pro are expected to carry a similar design with a curved AMOLED panel on the front with a punch hole on the top left corner. Samsung had apparently confirmed that it would be offering new AMOLED panels and an ISOCELL camera sensor on the new Xiaomi flagship, which could be the company’s new ISOCELL Bright HMX sensor. 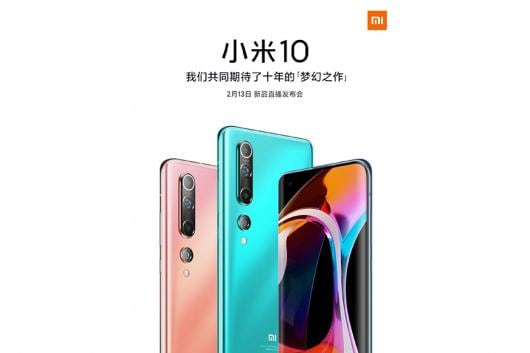 The leaked press renders spotted on Chinese social media network Weibo shows that the Mi 10 Pro will arrive in two different shades of blue and will have the tagline "Technology Breakthrough Limit." Some of the highlights of the phone confirmed by the press render including the Snapdragon 865 chipset, 100-megapixel 8K movie camera, 50x zoom, and balanced stereo. Of course, sporting the new Snapdragon 865 chip it will also offer 5G connectivity. The press render of the Mi 10, on the other hand, shows the device in pink and what seems like a sea blue colour option.

If these are truly the pricing of the Mi 10, this means that the Mi 10 Pro will be priced even higher, since it is going to be a more high-end version.

It was confirmed that the Mi 10 will go on to use the world’s first low-power LPDDR5 DRAM chip made by Micron. The RAM will offer a transmission rate of up to 6.4Gbps, nearly twice as fast as LPDDR4, 20 percent faster than LPDDR4x, and a 50 percent improvement in data access speed. It also reduces power consumption by more than 20 percent compared to the previous generation. According to Micron, devices featuring LPDDR5 RAM will include 8GB or 12GB of memory in the first half of this year but could reach 16GB in the second half. This means that the Xiaomi Mi 10 could feature up to 12GB of LPDDR5 RAM and later introduce a high-end 16GB RAM variant. Apart from Micron, Xiaomi is expected to source these LPDDR5 modules from Samsung.

One of the leaks suggests that the Mi 10 Pro will feature a quad-camera setup at the back featuring a 108-megapixel, 16-megapixel, 12-megapixel, and 5-megapixel sensors. The display will measure at 6.4 to 6.5-inches with a 2080x1080 pixel resolution and 90Hz refresh rate. The top of the line variant will include 16GB RAM and 512GB storage, while the battery will be rated at 5,250mAh.

The new Mi 10 series is going to launch on February 13, just two days after Samsung will launch the Galaxy S20 series. Xiaomi could start selling the new Mi 10 in February itself but not before Samsung starts selling its new flagship series. Xiaomi India recently announced that it will be pushing the Mi brand and premium Mi smartphones to the country. We can’t be sure that if the Mi 10 will come to India, but it would be exciting to see if Xiaomi can fit in the premium flagship space.