Home » News » Tech » Xiaomi Mi 10i 5G Review: A Fantastic Entry Point To The Largest Ever Mi Lineup Of Phones, Yet
7-MIN READ

Xiaomi Mi 10i 5G Review: A Fantastic Entry Point To The Largest Ever Mi Lineup Of Phones, Yet

The Xiaomi Mi line-up of phones in India has never been bigger than this. And most certainly, never been more vibrant than this. You have the slick and sophisticated Mi 10 flagship, the powerful Mi 10T 5G and the more affordable Mi 10T Pro. The fourth addition to the Mi phone line-up for Xiaomi in India is the Mi 10i 5G, and this adds not just another option for you as a consumer but also tackles another very attractive and popular price point. The Xiaomi Mi 10i 5G goes on sale in India in three variants and three colour options. The entry spec variant with 6GB RAM and 64GB storage is priced at Rs 20,999 while the mid-spec 6GB+128GB variant costs Rs 21,999 and the 8GB+128GB configuration will cost you Rs 23,999. The highlight, the 108-megapixel camera that leads the quad camera system on the Xiaomi Mi 10i 5G.

Quite attractive pricing, because there was the likelihood of the Xiaomi Mi 10i 5G coming up against the OnePlus Nord for a lot of users in the shopping shortlists. And it has a serious advantage, from the outset. And the Xiaomi Mi 10i 5G joins the rest of the Mi phone lineup and is now the entry point if you want to buy a Mi phone from Xiaomi. The flagship Mi 10 sits at the top of the ladder and is priced around Rs 44,999 onwards while the Mi 10T is priced Rs 35,999 onwards and the Mi 10T Pro that costs Rs 39,999. You might have noticed this, and you’d be spot on if you had—the Xiaomi Mi 10i 5G is very similar to the Xiaomi Redmi Note 9 Pro 5G in terms of the specs, which makes it quite interesting that Xiaomi has slipped this under the Mi banner globally, including India. 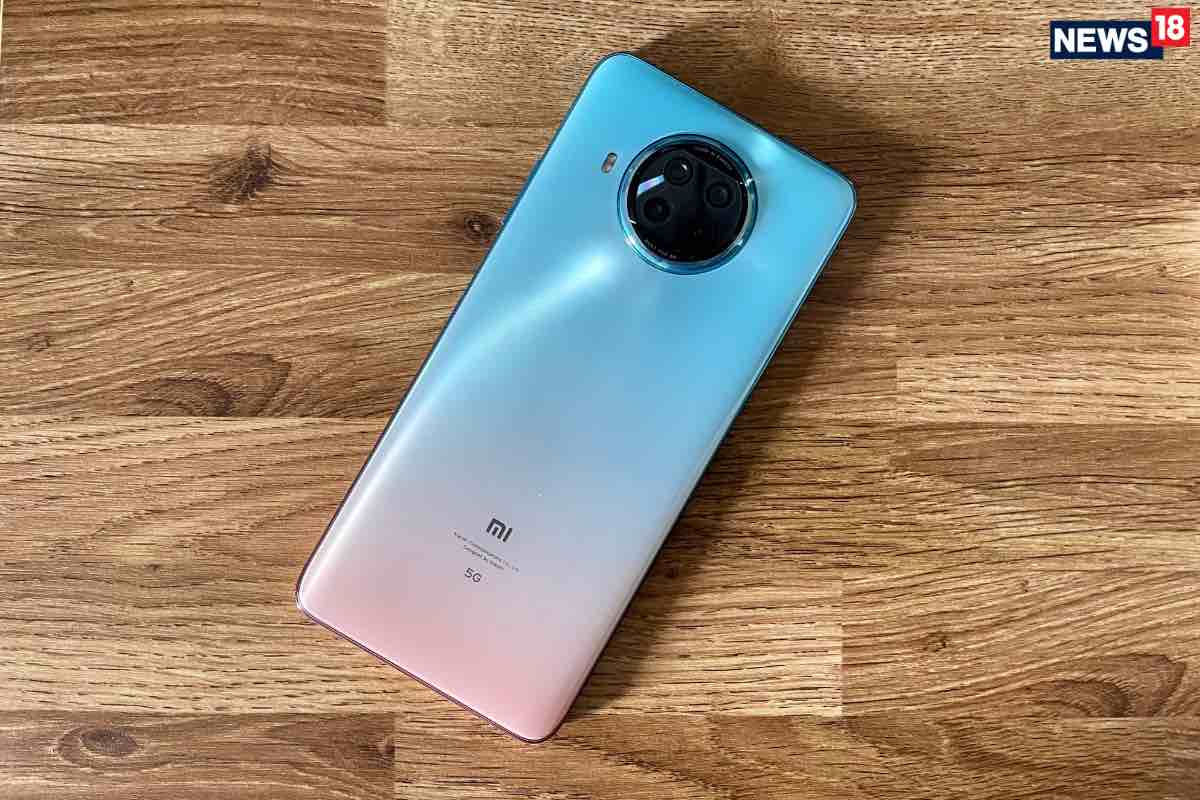 There is just something about the Xiaomi Mi 10i 5G’s design and how it looks. You can choose from three colour options—Pacific Sunrise, Atlantic Blue and Midnight Black. The blue and the black, as their names suggest, are pretty straightforward to look at in terms of the colours that you see. It is the Pacific Sunrise, also pictured here, which is the unique variant. The way the colours, including orange, green and blue simply meld into each other is something that you have to see to believe. Photos may not do it justice. Nothing on the front of the phone betrays this visual brilliance at the back, though the spines do give a hint. What I really appreciate is the finish on the Xiaomi Mi 10i 5G, particularly in this colorway—it is matte and the coating on this means you’ll very rarely see any smudges or fingerprints spoiling the overall look of the phone.

The Xiaomi Mi 10i 5G is well built. It weights around 214 grams and though there is a massive camera module on the back, it is evenly weighed, and you’ll not find your wrists feeling the strain after using this for a while. Everything falls nicely to hand, including the recessed power key. That is where the fingerprint sensor also resides. That and face unlock authenticate and respond quickly enough, though face unlock sometimes stumbles a bit of the ambient lighting isn’t adequately bright or the face isn’t lit up evenly. The variant that we are testing here is the top spec option, which is 8GB RAM and 128GB storage. Under the hood is the Qualcomm Snapdragon 750G octa-core chip. This is an 8-namometer chip, and it succeeds the Snapdragon 730G that did duties in the higher mid-range phones till now. It is faster in every single respect, including CPU and graphics performance. But then again, those are the incremental and larger updates you’d expect with generational changes. In the real world, the Xiaomi Mi 10i 5G performs as well as it should. It is consistent, it is not bogged down by a whole lot of apps running at the same time and you can rely on the consistent battery life. Gaming is smooth too, and while the game loads speeds aren’t perhaps the quickest, F1 Racing was a pretty neat experience with no stutters, no visible dropped frames and no drop in graphics or CPU performance because the phone remains really cool. The Xiaomi Mi 10i 5G, as the name suggests, is 5G ready as well.

The 4820mAh battery does well in terms of stamina and lasts a day with absolute ease, with the display set at 120Hz, auto brightness and 4-5 apps open at almost any given point of time. this has the 33-watt fast charging which means it can go from a fully discharged state to 100% in about 58 minutes. There is some cool trickery under the hood, with the Middle Middle Tab (MMT) technology that creates two pathways for the battery to change, thereby reducing heat generated during the charging process. Also, by splitting the battery into two separate segments, the speed of charge going into each section can be controlled, to improve the battery longevity. Fast charging batteries, as a rule, wear out sooner. The 6.57-inch display is an IPS LCD screen with the 2400 x 1080-pixel resolution and a pixel density of 395ppi. The layer that you interface with is the Corning Gorilla Glass 5. This display goes all the way up to 120Hz, but Xiaomi is smartly dealing with a problem that most high-refresh rate screens have had so far—battery life. This is something called the Intelligent AdaptiveSync Display, something we had also seen in the Mi 10T Pro, though that went up to 144Hz. The Xiaomi Mi 10i 5G basically understands the content that is on the screen at the time and adjusts the refresh rate accordingly—with the highest being what you have chosen in the display settings. Largely, the Xiaomi Mi 10i 5G will reduce the display rate to as low as 30Hz for text-based content, for instance. And it can push the envelope to 120Hz for gaming, while video content is usually around 48Hz. The idea is to save battery life with the dynamic switching of the display refresh rate based on the content being consumed at the time. Reading emails or an e-book at 120Hz is just an unnecessary waste of battery.

In terms of how this display looks, the Xiaomi Mi 10i 5G’s IPS panel does well on most fronts—brightness, viewing angles and colours. One does feel that the contrast could have been a tad better with certain content, such as watching some videos or while editing really colorful photos. But that’s a minor tradeoff for what is otherwise a very consistent display. It’ll be a good canvas for handling emails, dealing with hyperactive WhatsApp groups and for catching up on some Live cricket as you get some work done. Flexibility is its strongest point. Last but not least, the party piece. The camera setup that is led by a 108-megapixel camera. This is joined by an 8-megapixel ultra-wide camera, a 2-megapixel depth camera and a 2-megapixel macro camera. The 108-megapixel snapper is the Samsung HM2 sensor and has the 9-in-1 pixel binning for what ultimately results in a massive 2.1-micron Super Pixel when you shoot in the 12-megapixel mode by default. Our regular readers would probably be able to predict that my preference would be for the 108-megapixel mode for the really important photos, because I like the extra detailing on offer for edits. Even in the standard mode that most users will shoot in by default, the photos are extremely well detailed and crisp. The finest of detailing is visible across photos, and this camera setup delivers on colours as well as sharpness in just the right amounts. There is no sorcery at play, to make the blue in the sky looker deeper than it is or boost the green of the tree in the frame. Night mode photos are lit up well with individual lighting sources detailed properly and with no overexposure. In the 108-megapixel mode, I did notice that the edges of the frame tend to be a tad softer than what I had expected. On the plus side though, the Xiaomi Mi 10i 5G faces no delays with focusing or focus tracking. And as a camera phone, the Mi 10i 5G pretty much delivers effortlessly.

The Last Word: Xiaomi Mi 10i 5G Shows A Growing Confidence, More Than Anything Else