Home » News » Tech » Xiaomi Mi 11 Ultra Review: To Buy This Android Superphone, You May Not Have To Sell Any Organs
9-MIN READ

Xiaomi Mi 11 Ultra Review: To Buy This Android Superphone, You May Not Have To Sell Any Organs

It was early last year, much before the Coronavirus pandemic became the stuff of nightmares, when I had spoken about Android superphones. An elevation, a notch above Android flagship smartphones in every single way. The specs and the experience You’ll always pay a premium for Android superphones, as was the case then with the Samsung Galaxy S20 Ultra and then subsequently earlier this, the incrementally improved Samsung Galaxy S21 Ultra were launched. Yet, these were the only two superphones till now. The ones that really stayed a step above the other flagships, the “Pro” phones, if you may. But that was that. Here and now, the Xiaomi Mi 11 Ultra becomes the newest addition to the superphones space, and from what I have experienced in the past few days, it absolutely deserves its place in that elite company. The price may really surprise you.

Even more to, and to be fair, it also costs a whole lot lesser than the phones that preceded it. And that really ups the Android superphone stakes. The Mi 11 Ultra is available as the 12GB RAM and 256GB storage spec and is priced at Rs 69,999. In comparison, and that phone also has its own advantages and pulling power, the Samsung Galaxy S21 Ultra still retails for around Rs 1,05,999 before any discounts or deals that you may clock to your advantage. A lot of similarities in terms of the display size and resolution, the processor (albeit on the global version for the Galaxy S21 Ultra—Indian units get a very capable Exynos chip), but there are those differences too which really give the Mi 11 Ultra the sort of visual appeal and personality that’ll allow the phone to be spotted and identified correctly from a mile away. And the camera module on the back has a lot to do with that. Let me get this out of the way nice and early. There will be comparisons between the Xiaomi Mi 11 Ultra and the Samsung Galaxy S21 Ultra, and each phone has its strong points. For instance, while the Mi 11 Ultra definitely has the visual appeal advantage, the Galaxy S21 Ultra more than holds its ground with the large 108-megapixel camera. What you pick, depends on what you need more. 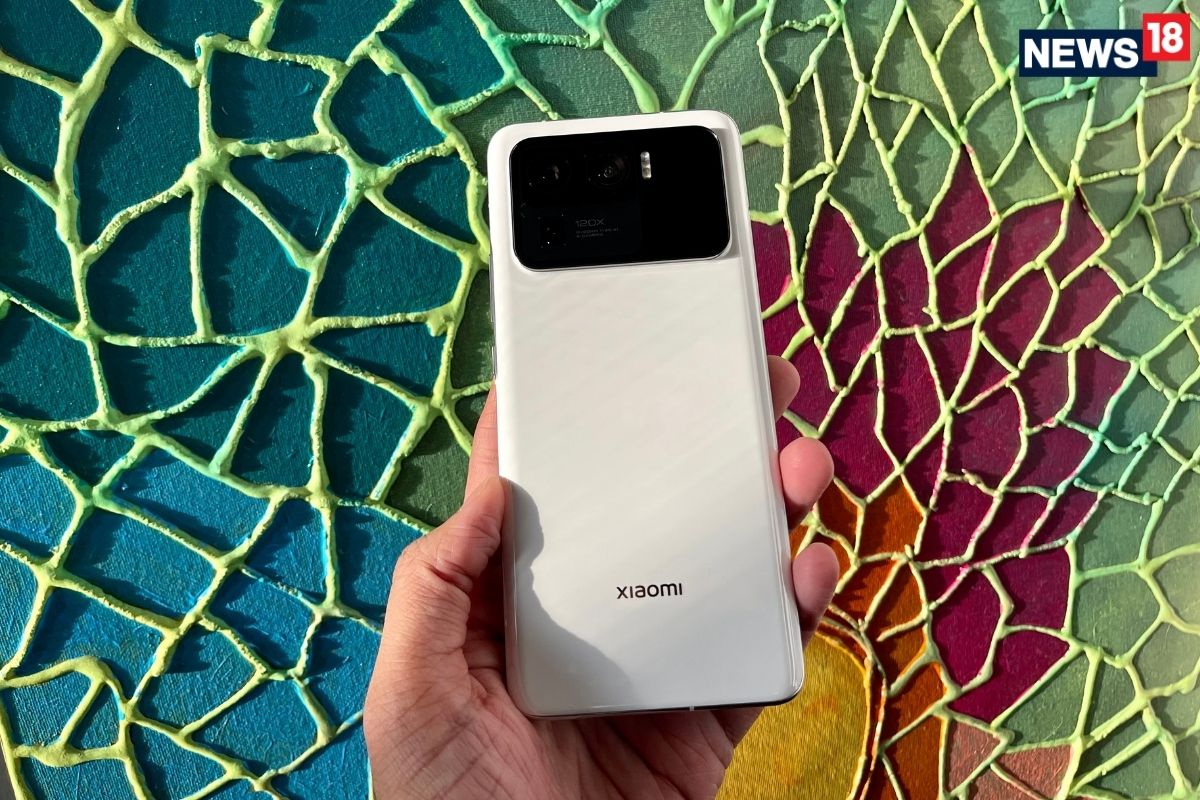 The Mi 11 Ultra has personality. The review unit that we have here is the white colour option and you have the option of a more conventional black colour too. The ceramic finish looks really cool, and the colour choices are aptly called Ceramic White and Ceramic Black. It is a large phone, but that you’d have expected considering an Android superphone must have a big display real estate to show off. There’s Corning Gorilla Glass Victus joining in on the fun with the metal. You’re paying for a superphone, and you’ll get the best possible material to interface with every time you pick up or hold the Mi 11 Ultra. There is something really likeable about the design, particularly in white colour. The conventionality gets a pretty resounding kick out of the window once you flip the phone over. That large camera module will most certainly divide opinion. I’d assume that if you’ve bought the Mi 11 Ultra, you agree with how it looks. I have to say I quite like it. The camera system has, by many phone makers over time, been given different treatment to somehow soften the blow of camera modules jutting out or simply getting larger in size. Yet, there seems to be a proportionality to how Xiaomi have done the Mi 11 Ultra’s camera module design, in deep black colour. It proudly highlights the 120x zoom capabilities and you are yet to actually see the hidden cool thing. The secondary display that sits alongside the cameras.

A phone with two displays! Yes, that is true. Essentially, this is the screen from a Mi fitness band, but here, it adds the sort of coolness that other phones haven’t come around to. It is 1.1-inch in size in full colour and serves as a screen for telling you there is a new notification for you in case you like to keep your phone face down, can have cool wallpapers and can be used to tell you exactly how a selfie looks in case you fancy using the primary camera system at the back. It is not large enough and neither is it meant to let you read or reply to notifications from there nor can it be used for additional tasks at this time. It is limited but it is very cool. That astronaut wallpaper, in particular, is just very cute. The cameras mean business. The trio of cameras is led by a 50-megapixel Samsung GN2 sensor that’s 1/1.12-inch in size with f/1.9 aperture, 4-into-1 pixel binning tech, and optical image stabilization. This is accompanied by the 48-megapixel Sony IMX586 ultrawide camera and another 48-megapixel telephoto camera that does 5x optical zoom, 10x hybrid zoom and up to 120x digital zoom. In fact, the GN2 that I’ve just mentioned, gets its debut in the Mi 11 Ultra. This is by far the most advanced camera system on a Mi phone till now, and that speaks volumes about the seriousness with which the company is approaching smartphone cameras. And it isn’t just the hardware, the software side of things also come together brilliantly to deliver the pristine photos you’d expect. The 4-in-1 pixel binning means when things are merged to give you default 12.5-megapixel photos, essentially the data collected is worth each pixel being a large 2.8 microns. That’s good news for detailing, lighting accuracy and indeed more illumination for low light photos. The theoretical assumptions are actually very much delivered on by the Mi 11 Ultra. Mind you, there are still some eccentricities in the camera app which somehow don’t do a superphone justice, but to be fair, an update is what’s needed. For instance, you need to delve deep in the camera interface menus to enable the secondary rear display for viewing the selfie frame before you tap the shutter button.

The photos that emerge from the Mi 11 Ultra, whether the default 12.5-megapixel ones or the higher resolution 50-megapixel ones, are some of the very best we have seen in the Android smartphone space till now. Really rich in detail, very expressive with colours without ever getting too rich, higher res photos that leave a lot of room for editing too and low light photos that end up with a nicely lit frame as well as surprisingly accurate colours and good detailing. Do notice though that the 50-megapixel images do have slightly more subdued colours and seem to be going through less processing in the background. For all photos though, the colour distinction and separation is really good, so much so that the different green in trees is nicely distinguishable. Crop and zoom in and you’ll really notice a lot of detailing. The 120x zoom has to be the party piece of the Mi 11 Ultra, and the photos at 5x optical zoom are absolutely fantastic. Push things a bit and you can get up to 50x with really stable hands and get results that get you the just of something that may be really far away. To be honest, as you go higher up the zoom count, the Mi 11 Ultra’s photos still manage to retain more substance than a lot of other phones which really high zoom counts.

Under the hood is the latest and greatest Qualcomm Snapdragon 888 chip with 12GB RAM to go with that. This chip really takes the game forward compared with the predecessor, the Snapdragon 865 series—this is as much as 25% faster with CPU performance and the graphics are up to 35% more powerful and is right on cue for the latest line of top-notch Android phones. There are advantages of the new 5nm architecture. Then there is the fast UFS 3.1 storage which offers really quick data and write speeds which further speeds up performance. What you essentially have is a phone that doesn’t slow down, will not slow down and runs the most powerful chip right now for Android smartphones. The hardware seems to be coming together really nicely. The in-display fingerprint sensor is fast and accurate. The 6.81-inch AMOLED display is a beautiful canvas to look at and ticks off everything you’d expect including up to 120Hz refresh rate and HDR. The rear display could get some more goodies at some point to make it more useful—it should be more than just a novelty that wears off after some time. Then there’s the 5,000 battery which exhibits very good endurance levels and supports the fast 67-watt charging too, for wired and wireless. The MIUI 12 experience is pretty much the same as other Mi and most Redmi phones. Consistency is good, and that should be handy for a Xiaomi phone user who has decided to splash the cash for the Mi 11 Ultra. But that also means the rough edges remain very much there. There are app duplications, for instance, such as Google Photos and MIUI’s own Gallery app and Google’s Files app as well as MIUI’s File Manager app. There is significantly lesser preloaded app clutter too but the GetApps app notifications still really annoy me—something that hasn’t lessened with the passing of time. Maybe there are too many of those, and maybe I don’t like to be prompted that much. If you can call those adverts, there’s that bit too. That being said, I turned off the Personalized Ad Recommendations, an option that is buried in Settings -> Passwords & Security -> Privacy -> Ad Services. I didn’t see any ads interfere with the notification bar after I explicitly turned them off. There are still recommendations all over the place, including the App Vault screen (that’s -1 on your home screen), which serves up a lot of ‘popular videos’, ‘utilities’ which are basically app and task suggestions that lead to an app or “recommended” apps. Simply put, ads on a phone are intrusive, invasive and very rough diversions in the usage experience. Top that off, a smartphone that costs Rs 69,999 and claims to be an Android superphone, should not have any ads. Period.

The Last Word: Why Would You Buy A Flagship When You Can Buy A Superphone?

The Xiaomi Mi 11 Ultra wants to be known as an Android superphone. And it indeed is an Android superphone. The specs, the design, the photography prowess and indeed the overall performance, is just top notch. This is by far and away the most advanced Xiaomi phone till now, also indicative of how far along the company has come since the really fun days of the Mi 3 flagship killer, from all those years ago. This is Xiaomi going head on in the higher echelons of the Android smartphone space, with a lot of poise and a lot of confidence. The attention to detail with the Mi 11 Ultra is exactly what a phone with that price tag would deserve. And anyone who wants solid photography performance, will come away really impressed. And genuinely happy about their choice. That being said, something needs to give. I do understand that MIUI has its own legion of fans, so much so that there’s a cult following for the software. Yet, for a phone that is competing with the very best that the likes of Samsung and OnePlus have to offer, adverts baked into the Android experience just do not feel right. In fact, there’s a serious chance that it’ll turn off the more discerning demographic.