The Mi Notebook 14 e-Learning Edition bucks the trend that Intel Core i3 chip powered laptops are strictly limited in performance and basic with the experience. And with a price tag of Rs 36,999 for a spec that includes a fast SSD, it really delivers value for every buck that you spend.

This year has been great for laptops. Once believed to be a dying breed not too long ago, these computing devices have been the ticket as millions around the world were forced to switch to work from home due to the COVID pandemic still sweeping the planet. Good timing then, by Xiaomi, to make their entry into the laptop market in India this year. The line-up is now wider than before, with the addition of the Xiaomi Mi Notebook 14 e-Learning Edition. This is now the most affordable of the Xiaomi Mi Notebook laptop options, and there is that one big change compared with the predecessors—it’s also got the webcam built in, which the elder siblings don’t. The price tag, you ask? That’ll be Rs 36,999 for a machine that runs an Intel Core i3 processor with 8GB RAM and a fast solid-state drive instead of the much slower hard drive that most of the Xiaomi Mi Notebook 14 e-Learning Edition’s rivals still vouch for.

There is a familiarity, as there should be. It clearly tells you that while they are different lines, they are from the same family. The same family of Xiaomi Mi Notebooks, which also include the Mi Notebook 14 Horizon Edition and the Mi Notebook 14. The very fact that the Xiaomi Mi Notebook 14 e-Learning Edition has an all-metal body is a very positive upgrade over the plastic that still makes up most of its rivals. It is these things that really enhance the usage experience and makes a consumer feel that it has been money well spent. The anodized sand blasted coating all through is the sort of further attention to detail that is really appreciated. To distinguish this from the grey colour of the Horizon Edition series, this gets a silver colour. Xiaomi has done it right with the ports and connectivity options as well. There are two USB 3.1 ports, one USB 2.0 port, a 3.5mm audio port and an HDMI port. There is no USB-C port, which is available in the Xiaomi Mi Notebook 14 Horizon Edition. Remember though, the USB-C is for data transfer only and not for charging the laptop in that case as well. There is no card reader too, which means you’ll need to get an accessory for that.

Unlike the Xiaomi Mi Notebook 14, the Mi Notebook 14 e-Learning Edition gets a webcam integrated above the display. That really has to be the most convenient add-on, and no longer do you need to manage with USB based webcams. Mind you, this is 720p though and could struggle a bit with graining if the lighting around you is low. Switch on the lights properly and this gets the job done. For virtual classrooms, for video conferences and meetings and also for catching up with friends.

The 14-inch display panel in the Mi Notebook 14 e-Learning Edition is the LED panel with the Full HD resolution. It is exactly how you would expect it to be, but what stands out is how bright it can go. This is also a matte display, which means reflections don’t really get in the way. In most office environments, something that you will return to eventually, you will have badly thought out and installed overhead lights reflecting back off a laptop screen and into your eyes—that’ll be much less of a problem with the Mi Notebook 14 e-Learning Edition laptop.

This screen does well on the sharpness bit as well, which helps with text as well as media. Webpages are easy to read, and videos doesn’t look smudgy. This display is very much acceptable as far as the colors and the richness are concerned—not necessarily the most accurate, but you still get good color separation. The biggest takeaway has to be that there is absolutely no hint of washed-out colors or bad viewing angles, two problems that plague a lot of the Mi Notebook 14 e-Learning Edition’s rivals. The Mi Notebook 14 e-Learning Edition runs the Intel Core i3-10110U processor, which makes this the only Core i3 powered variant in the line-up and also the most affordable Mi Notebook device at this time. The name, Mi Notebook 14 e-Learning Edition, would suggest this is meant for schools or children who may be taking their classes virtually these days. That may very well be the case, but from what I could decipher as far as the performance and the experience goes, the Mi Notebook 14 e-Learning Edition will work for pretty much any use case. Of course, with the virtual performance ceiling of the Core i3 chips very much a reality, but if you need a machine for office work that doesn’t go much beyond document editing, web browsing and some custom workflows such as content management systems, home entertainment use, and of course, something for your child to attend the daily virtual school classrooms instead, this just works.

The Mi Notebook 14 e-Learning Edition gets 8GB of RAM and what really helps with the performance is the 256GB SATA 3 SSD that gets you going much sooner than the traditional hard drives ever would. This SSD does as much as 600MB/s of read and write speeds, something laptops that still have hard drives in the same price range, would never be able to match. Twenty tabs on Microsoft Edge, five Word documents, one Spreadsheet document and Apple iTunes streaming music, and the Mi Notebook 14 e-Learning Edition carried on smoothly without any stumbles. Battery life is quite robust too. Xiaomi claims 10 hours if battery life on a single charge—I managed to get close to nine and a half hours, with the display brightness at 30% most of the time. The more frugal you are with browser tabs and open apps, the better the battery life stats will be. Nevertheless, with the Mi Notebook 14 e-Learning Edition, you can think of leaving the adapter behind in case you wish to take this to office, for instance.

The Mi Notebook 14 e-Learning Edition gets what is called the scissor-switch keyboard mechanism. It becomes pretty clear at first glance that the key size and the key spacing is nicely done. The keys fall in the range of fingers quite well. Xiaomi says this has a 1.3mm key travel distance, and after spending some time typing on this keyboard, my subjective opinion is that the key press response is a tad too spongy and lesser would have been better in this case. Nevertheless, it is something you can get used to soon enough.

There is no backlighting on this keyboard though and that can get a bit limiting at times. It’s a similar follow-through from the Mi Notebook 14 and while this doesn’t really bother for the most part, it does rankle if you are trying to use the laptop in a room with low ambient lighting. And it is impossible to type if the lights around you are completely turned off. Basically, no late-night article writing sessions if the bedroom lights are off.

It is a pretty large touchpad which does well enough with swipe gestures, be it the vertical or the horizontal swipes. Palm detection works well and doesn’t lead you to unintentionally select or click something as you may be typing away merrily on the keyboard. The left and right click keys are physical buttons, which means in case you are switching from a laptop that has the touch-based implementation instead, you’d have to press harder till your fingers get used to the change in landscape. 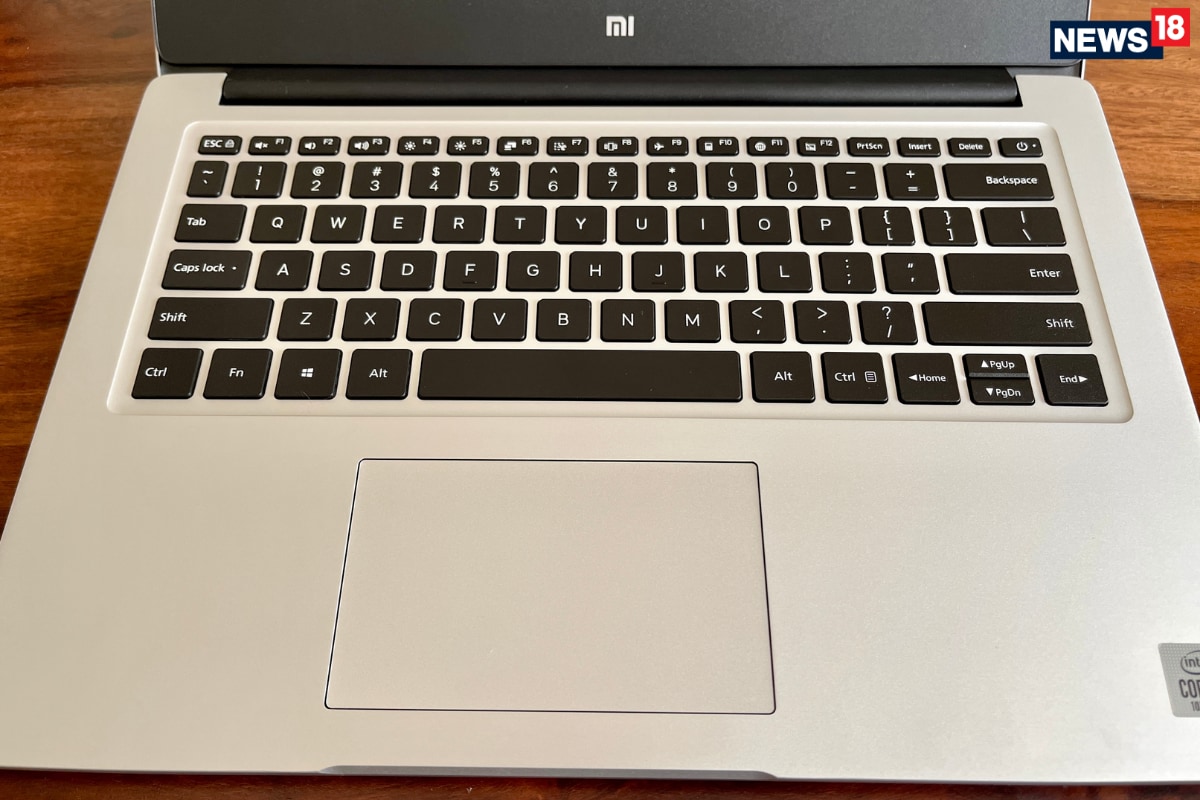 The Last Word: This Tells Us Core i3 Powered Laptops Don’t Have To Be Sluggish

There is a reason why there was this perception which I just mentioned. A quick glance at HP’s options list points us to the HP Laptop 14s (cf3006u) which is priced around Rs 40,000 and offers a 10th generation Intel Core i3 processor with just 4GB RAM and a much slower 1TB hard drive. Similar scenario in Dell’s world as well, with the entry spec Dell Vostro 3501 also priced around the Rs 40,000 price point running a lower spec Intel Core i3-1005G1 processor with 4GB RAM and a 1TB hard drive. In comparison with the SSD packed Mi Notebook 14 e-Learning Edition, these two laptops will be significantly slower in terms of Windows 10 load times, the snappiness with which apps open and allow switching and also will hit the virtual performance limits much sooner while multitasking.