Xiaomi has introduced the Redmi 5A as its entry-level smartphone offering in India. The successor to Xiaomi's widely popular Redmi 4A boasts of dual-SIM connectivity along with a dedicated microSD slot for expandable storage. Find out how the Redmi 5A fairs in our more than a month's usage of the device.

Xiaomi has pushed its budget smartphone launches periodically into the Indian market. As a result of this, the Chinese smartphone manufacturer now sits comfortably at the top in terms of number of smartphone sales in the last year, as per several reports. One such recent release by the company comes as the successor to the Redmi 4A and is the latest entry-level smartphone by Xiaomi up for sale. The Xiaomi smartphone in focus here, is called the Redmi 5A.

The Redmi 5A has been launched as Xiaomi’s most budgeted offering in India, with a price tag of Rs 4,999. This is due to an ongoing discount of Rs 1,000 on the first five million units of the Redmi 5A. Afterwards, the phone will retail at its original starting price of Rs 5,999 for the 2GB RAM, 16GB storage variant. That being said, let us know how the smartphone performed in our over a month’s usage in this review.

Don't feel like reading? Watch the Xiaomi Redmi 5A Review instead

Xiaomi has certainly focussed on providing as many features on the Redmi 5A to its users as possible at its price tag. The smartphone flaunts a better than most HD display in its budget, decent firepower delivering a subtle performance and a dual SIM slot coupled with a dedicated microSD. While the list of features seems to be impressive at the first glance, let us emphasize on them one by one to know more.

In terms of build, the Redmi 5A sports a very simple and neat make, mostly made of plastic with a slight metallic finish. There is a camera at the back with an LED Flash next to it, Sim and microSD slots on the left and power key and volume rockers on the right. There is a micro USB port at the bottom while the upper edge sports a headphone jack and on top of all this, an IR Blaster to control your household gadgets.

The 5-inch HD display on the Redmi 5A is bright enough and carries ample colours and contrast to deliver a good video watching experience. On-the-go binge-watching will certainly be fun and not much can be complained about this. There is not much changed from the previous model though. The Qualcomm Snapdragon 425 SoC powering the Redmi 5A is also the same as found on the Redmi 4A. It runs MIUI 9 on top of Android Nougat, providing the Mi functions and features to users, like Mi Drop and Mi Remote (thanks to the IR blaster at the top), which do come in handy every now and then. Coupled with a 2GB RAM and a 16GB internal storage, the overall performance delivered by the smartphone is decent enough for average smartphone users. It can easily cruise through daily smartphone tasks like handling social media accounts, basic work-related software and even gaming at a basic level.

An impressive feat offered by the Redmi 5A at its price point is the dual-SIM connectivity in addition to a dedicated microSD slot. To recall, the Redmi 4A provided support for micro SIMs through a hybrid SIM slot. Xiaomi has now downsized the supported SIM size to nano-SIMs, making enough space for a microSD to have its own slot. This provides an expandable storage of up to 128 GB on the smartphone now. 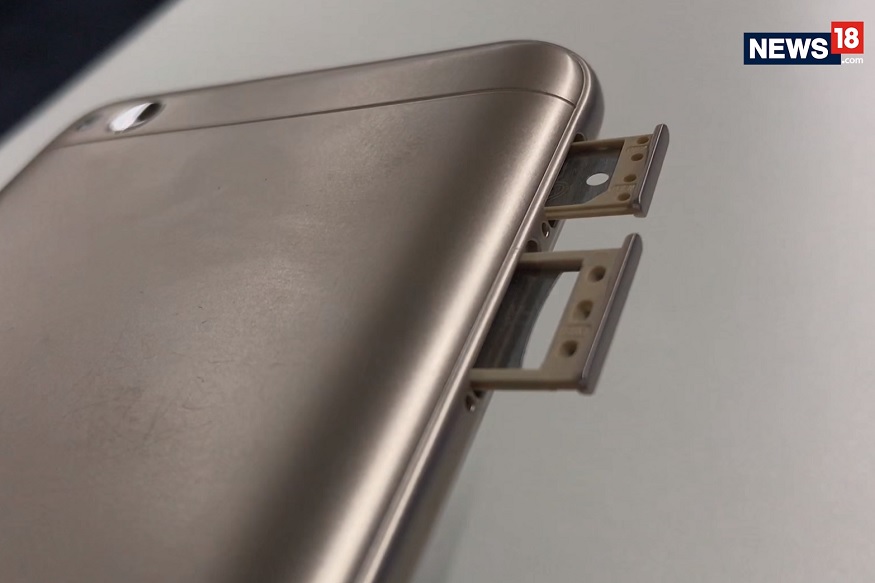 The smartphone comes with pre-loaded Microsoft Apps as well as MIUI’s own set of apps which are most certainly useful for on-the-go workers. Extra functions like Second Space, Dual Apps, Split screen, Gesture Shortcuts as well further increase the ease of use.

Xiaomi has also downsized the battery on the Redmi 5A to a 3000 mAh capacity, but it is still good enough and can easily take more than a day’s work on it. Xiaomi claims an impressive 8 day standby time on this smartphone. While the Snapdragon 425 SoC on the Redmi 5A can be a good choice for a subtle smartphone user, it will not cater well to those who use their smartphone extensively. The app loading time on the smartphone is noticeably large and even a few lags are encountered every now and then. This is especially noticed while playing a heavy game or using such an app. Our advice would be to keep your smartphone usage mellow with the Redmi 5A.

The Redmi 5A surprisingly misses out on a fingerprint sensor, which has become a necessity these days irrespective of the price tag of the smartphone. So for security purposes, users are limited to a pattern or a pin lock.

The cameras on the Redmi 5A are quite decent for a smartphone at this price, but not in general. If we were to neglect the entry-level price of the Xiaomi smartphone, the pictures clicked through the 13-megapixel primary camera lack luminosity and one might have to struggle to set the right focus and still get a blurred setting afterwards. The 5-megapixel selfie shooter also produces grainy images with a hazy background. The beautification mode might come to your rescue there.

Also, as with all the other Xiaomi smartphones, there are no earphones offered along with the Redmi 5A. There is no doubt that Xiaomi has done a commendable job in raising the bar for entry-level devices with the Redmi 5A. The device is quite promising when put next to any other competition with the same price tag. To sum it all up, in case you are looking for an entry level smartphone that gives you a good overall performance with easy handling, a variety of accessibility features and of course, the expandable storage in addition to dual SIM connectivity, you can definitely go for the Redmi 5A. And for those who expect a more power-packed performance from their smartphone and need a better camera quality, you can skip this one.