News18» News»Tech»Xiaomi Redmi K20 Pro Review: The OnePlus 7 is in The Line of Fire
9-MIN READ

Xiaomi Redmi K20 Pro Review: The OnePlus 7 is in The Line of Fire

There is very little to complain about the Redmi K20 Pro making it one of the best handsets to buy right now in the Rs 30,000 price bracket.

Just like it's hometown market, Xiaomi is going aggressive with its Redmi brand in India. It launched the Redmi Note 7 and the Note 7 Pro earlier this year and has already sold 5 million units in the country. And now we have the K20 and the K20 Pro, the company's newest flagships.

Right after the Poco F1, this is Xiaomi’s second attempt at undercutting OnePlus in the sub-premium flagship category. Of course, OnePlus took a bigger jump this year and launched a high-end version and small refresh of last year’s model. So the Redmi K20 Pro isn’t as premium as the OnePlus 7 Pro but definitely tries to become everything that the OnePlus 7 isn’t. Confused? Well, let’s just dive deep into the review then.

THE MOST PREMIUM LOOKING REDMI PHONE TILL DATE

If you thought the Note 7 series was a big step for Xiaomi in terms of design, wait till you look at this. The K20 Pro, like most smartphones in its range, features a front and back glass design with a metal chassis in the middle. While we've seen gradient glass finish in all sorts shades and colours, this one is like no other. The Fiery red variant that was sent over, has this mystical finish with a black bar in the middle flanked with trippy light-play in shades of red. The pattern seems to move depending on the angle of light hitting the glass. There is also a similar finish in Glacier blue and if you don't fancy colours then there is also a Carbon black variant.

All that glass and a chunky battery does make the phone a bit heavy, almost touching the 200-gram mark. And it can get slippery and attract fingerprints and smudges, so you better use a case. Also, there is no waterproof certification here, but the company claims a P2i nano-coating and rubber-lined ports which can help against minor water splashes. 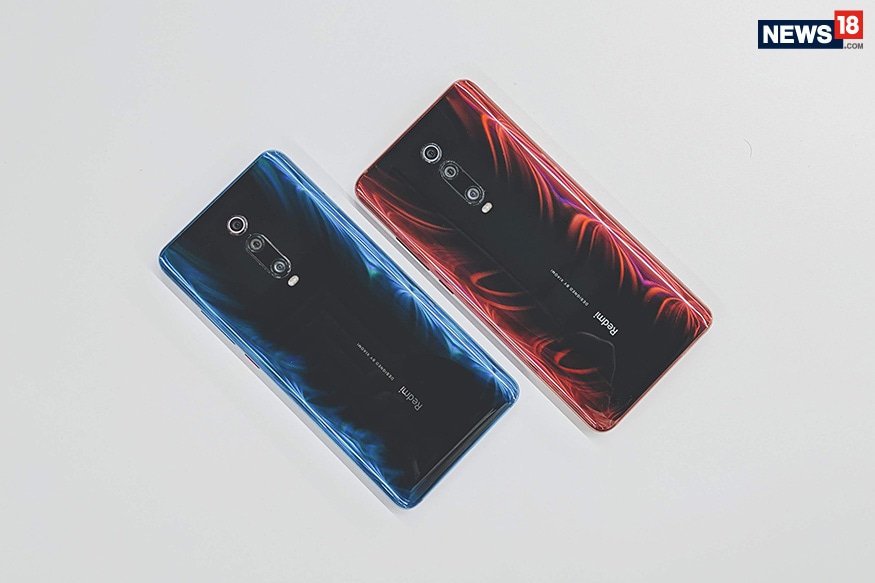 The power and volume buttons on the right, the 3.5mm audio jack is placed at the top along with the secondary microphone, while at the bottom there is the USB Type-C port, the primary microphone, the speaker, and the SIM tray.

Xiaomi has kept the front notch-free and made use of a pop-up selfie camera. Just a reminder, the OnePlus 7 Pro has a pop-up selfie camera, but the OnePlus 7 still uses a waterdrop notch (see what I did there). Oh, and the pop-up camera is quite unique. It comes with its own LED lighting, as if the futuristic camera opening and closing sounds are not enough to geek you out. This also doubles as a notification and charging LED as Xiaomi has cut a small ring on top of the camera module. It isn’t the best location to have a notification LED, but does look unique. Also, if you are curious, then the red and black variants get a red LED while the blue variant gets a blue LED. Personally, I don't like pop-up selfie cameras, while they are slowly growing on me, I find any moving part inside a smartphone, a potential repair cost for the future. Plus it just makes the phone really heavy.

Let’s move on to the display. The phone comes with a 6.39-inch AMOLED panel, which is a first for a Redmi phone. It is claimed to offer a 91.9 screen to body ratio but there is a thin bezel around and a slightly larger chin at the bottom. It is essentially all display at the front. It's also a really good looking display offering a Full-HD+ 2340x1080 pixels resolution and support for HDR content.

Offering ample brightness of over 400nits you can use it easily under the sun and by default tuned to the DCI-P3 colour gamut. You get a slight saturation but you can fine tweak it so that the colours pop out. Sharpness is great and even the viewing angles, though you can see colour bands at extreme angles. Being an AMOLED panel there is also support for an always-on display and an in-display fingerprint sensor.

Xiaomi has done a good job here as content looks rich and sharp. If you are one of those who like to have punchy. color-rich display, then you won’t be disappointed.

SNAPDRAGON 855 ON A BUDGET

Of course, the key aspect of the K20 Pro is the performance, and for that Xiaomi has outfitted this one with a Snapdragon 855 chipset. The most powerful chipset from Qualcomm available on the mobile platform based on a 7nm manufacturing process and featuring eight CPU cores. Xiaomi has also added a total of eight layers of graphite to help the handset remain cool. You can choose either 6GB of RAM with 128GB of storage or the one that was sent to use for review featuring 8GB of RAM with 256GB of storage. Surprisingly there is no expandable storage.

Now clearly this is the most powerful Redmi phone and I found it to be as powerful as the OnePlus 7. Sure it is running on Xiaomi’s MIUI, but the company has optimised it rather well to compliment the hardware. Everything feels smooth and responsive leaving no margins for lag or slowdowns. As an everyday phone, you are going to glide through your tasks.

This also means that it has all the right ingredients for an immersive gaming experience. PUBG Mobile can run at the highest settings and supporting the newly launched HDR + Extreme settings. Temperature are mostly in check but can get a little toasty after a long gaming session. Xiaomi has also introduced ‘Game Turbo’ a dedicated space to further enhance the gaming experience with custom settings like improved touch response and enhanced visuals for increased in-game brightness and contrast.

As for the software experience, it is surprisingly good. The smartphone is running on MIUI 10 based on Android 9.0 Pie. Now there are no ads here, although you might have to turn off notifications for the system apps as they send unnecessary notifications, which can get annoying. Thanks to the Poco Launcher, there are some good customisation options like having an app drawer, custom icons, and a system-wide dark mode, which looks great on the AMOLED panel. Besides that you get all of the MIUI baked features which can come in handy. What I didn’t like was the fact that there are pre-installed apps, which the company just needs to do away with.

The in-display fingerprint sensor works pretty well, I would say with an accuracy of eight to nine times out of ten. There is face unlock here as well, but the pop-up camera is just slower than registering your fingerprint or feeding in a code. Other notable features include Hi-Fi audio support, which is great for audio lovers who like to listen to high-quality audio files. Sadly, there is no stereo speaker, but the mono speaker at the bottom is loud enough, almost as good as the OnePlus 7.

TRIPLE CAMERAS AT THE BACK WITH A POP-UP SELFIE CAMERA

Just like the OnePlus 7 Pro, Xiaomi has put three cameras on the back of the K20 Pro. Again something new for a Redmi phone. You get three focal lengths thanks to the ultra-wide angle, standard, and telephoto lenses. The primary camera makes use of the 48-megapixel Sony IMX586 sensor with an f/1.75 aperture which is similar to the Note 7 Pro. You also get a 13-megapixel ultra-wide-angle camera with a 124.8 degree field of view and an f/2.4 aperture and an 8-megapixel camera with a telephoto lens offering 2x optical zoom and f/2.4 aperture. Other features include laser autofocus paired with PDAF.

For taking selfies the pop-up selfie camera has a 20-megapixel camera which is protected with sapphire glass.

The camera app is pretty much the same as most of the recent Xiaomi devices. There are various modes like Portrait, Night, Short Video, Slow Motion, Panorama apart from the standard photo and video modes. You can also quickly switch between the three cameras, all of which offer different focal lengths.

By default, you get pixel-binned 12-megapixel images, but you can quickly take 48-megapixel shots by just hitting a quick toggle on the camera app. Photos in proper daylight look really good with ample details. In low light the pictures are decent but you can see noise starting to creep in. The telephoto camera also delivered similar results in low light, however photos with the wide-angle camera had the most amount of noise and looked soft.

Focusing is fast thanks to the combination of the laser and phase detection autofocus. The night mode is fair enough as it combined multiple shots taken at different exposures, but the results are nowhere close to what the Pixel phones can do with the Night Sight feature. Speaking of which, Google Camera works really good on the Redmi K20 Pro and in fact produces better contrast. There is an unbuilt AI algorithm to auto tweak your pictures as well, which mostly just oversharpens and increases saturation. Portraits look decent, but since the telephoto lens is used, you need to have some distance between the subject and the camera. Edge detection also works well in most situations.

The phone also supports 4K videos at 60fps along with slow-mo videos while the front camera can shoot 1080p videos at 30fps. You can switch between the sensors to with the different focal lengths. Videos look stable and colours look a tiny bit undersaturated. As for selfies, the front camera is capable of producing good amounts of detail and get good colour tones. While I am not a fan of taking selfies, but there is a lot of processing happening so make sure you shut it off unless you like smooth, flawless skin. The portrait mode was a hit and miss on the front camera as the bokeh effect didn’t look very natural.

Xiaomi has yet again packed a 4,000mAh battery and since their phones do have great battery management algorithms, it seemed to just work very well. In practical day to day usage, I could easily use the phone all day with a screen-on time of over 7 hours. If you have light usage then it can last through a day and a half without charging.

The K20 Pro also supports 27W fast charging, which is great, but the catch here is that you need to buy the charger separately for Rs 999 as the bundled charger is rated at 18W. It takes less than an hour to fully juice up the phone using the high capacity charger and about one hour and 25 minutes on the bundled 18W charger.

Considering the price, the Redmi K20 Pro has a lot to offer. There are a lot of positives, and some minor negatives. You get power-packed performance, a great display, long battery life with fast charging, best-in-class cameras, a premium design and the list goes on. To be honest, I didn’t have a lot to complain about this handset, and this is the best that there is. If you are tempted to buy a OnePlus 7, don’t miss out on this.