Xiaomi's latest 4K TV gets a 50-inch screen that supports HDR and Dolby Vision but is it worth the money?

Xiaomi entered the smart TV segment in India and changed its dynamics, forcing other brands to change their strategy and give consumers more options. With the technology becoming more affordable, Xiaomi is one of the many brands that has managed to bring a 4K viewing experience to a manageable budget for buyers.

And it has done that without compromising on the screen size. The latest Mi TV 4K version with a 50-inch is the one we are focusing on, and during the past few weeks, we managed to get a closer look at this TV and whether it delivers on the promise of value and quality in equal doses.

Over the years, the quality of the panel and the design of these affordable smart TVs has gone up a notch. I noticed the differences while comparing with my 5-year-old 4K TV, also bracketed in the budget segment. The bezels are smaller on the Mi TV, and the wide-screen profile gives you a better viewing experience. The colours are punchy, the viewing angles are clearer and we noticed the deep blacks don’t look bad, something that we’ve noticed with budget smart TVs earlier. Xiaomi has managed to pack a 50-inch screen into a not-so-heavy unit, which was easier to carry than I imagined.

The screen supports 4K UHD resolution along with HDR and Dolby Vision. In addition to this, the TV also has MEMC that offers content at a frame rate of 60Hz that is natively supported by the panel. You notice its effectiveness while watching sports and movies on the big screen. MEMC is a rarity on TVs in this range, but Xiaomi has managed to bring that to the table.

The other aspect of this TV that pleasantly surprised us was the audio quality. Xiaomi has packed the TV with 30W stereo speakers that support Dolby Audio and DTS:X for surround sound output. The resulting audio output from the unit was loud and clear, without any screeching sound that you usually get on TVs in this segment. 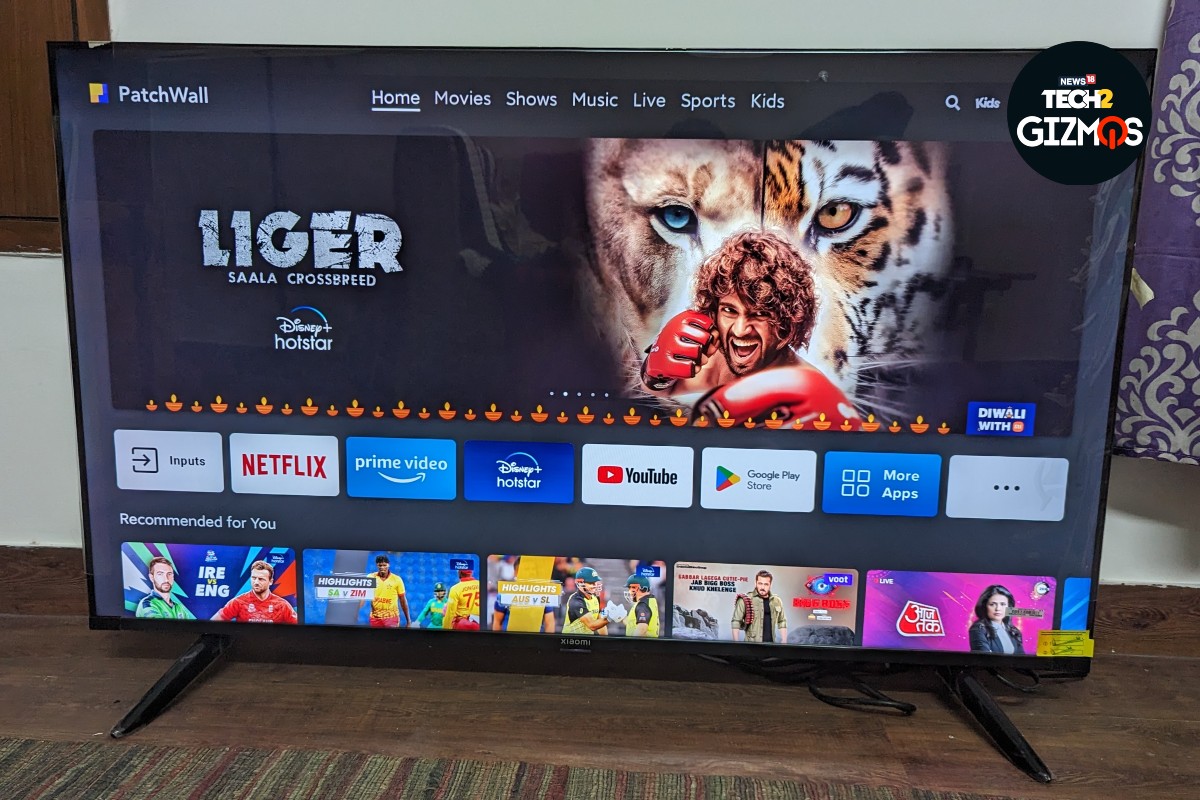 Xiaomi uses the PatchWall UI which is running over the Android TV platform. The interface is easy to use and slick to navigate around. You can connect your set-top-box and watch live TV channels from the same screen as the OTT apps. The bundled remote from Xiaomi has all the requisite buttons and the quick-access keys for Netflix, Prime Video and Disney+ Hotstar. It even has volume controls but we would have liked Xiaomi to use the lower space of the remote better. You get multiple connectivity ports to use external storage devices and streaming sticks like the Fire TV Stick or the Chromecast.

While we liked the build quality of the TV, the same cannot be said about the accessories offered by Xiaomi for this model. The stand you get in the box doesn’t exude the same confidence as the TV itself. Also, you don’t get a wall mount unit with the TV, Xiaomi wants you to buy it separately.

The other concern we have about the TV is the onboard storage, which for strange reasons has been limited to 8GB. Now, most people use a smart TV to download apps, which eats up space, so it would have been sensible to give 16GB storage. The lack of space could also become a hindrance later when the TV runs out of storage and slows down after a few years.

Xiaomi Smart TV X50 is a competent 4K TV with a big screen that doesn’t cost a bomb. You get a 50-inch screen, with support for HDR, and Dolby Vision that lights up the room and delivers punchy colours. The built-in speaker is a surprise package that might allow you to use the TV without a soundbar. It runs on the PatchWall UI built over the Android TV platform but the lack of storage could hinder the TV’s performance in the future.

The bundled remote works well, and you would hardly find anything to fault for this price. Having said that, the TV does not come with a wall mount unit, 8GB storage can be limiting and Xiaomi is still offering the TV with the Android 10 version.