Fake vs Fact: Did Sri Lankan Police Release this Video of Detaining an Accused in Easter Day Attacks?

The claim is false; the video has been circulating online since at least August 2018, more than nine months before the deadly suicide bombings happened on April 21, 2019.

Multiple Facebook posts have shared a video which shows police detaining a man dressed in a burqa, who the posts claim is one of the perpetrators of the Easter Sunday bombings in Sri Lanka. The claim is false; the video has been circulating online since at least August 2018, more than nine months before the deadly suicide bombings happened on April 21, 2019 in Sri Lanka.

The posts, first published on April 23, 2019 and shared around 600 times since, contain a video showing police forcing a man wearing a black burqa to remove the garment.

The post’s caption says: “A Buddhist dressed as a Muslim woman was caught by the Sri Lankan Police. He os one of the rouges who bombed the Sri Lankan Church.” 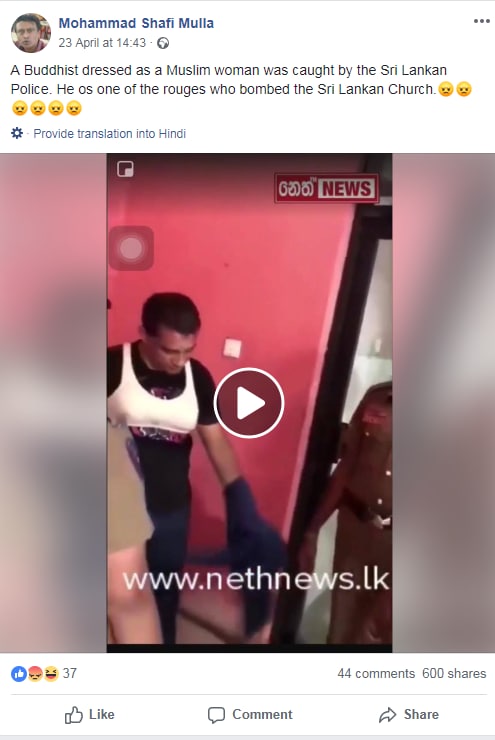 The same video was shared here on Twitter with the same caption, while the footage was also shared alongside similar claims here on Facebook.

The posts were uploaded two days after attacks on churches and hotels in Sri Lanka on Easter Sunday left more than 350 people dead.

A keyword search of the nethnews website found the exact same footage and an original article were posted here on August 30, 2018.

The Sinhalese-language story is headlined: "A man dressed in a burqa has come for revenge".

The story describes how police arrested a man who had disguised himself with a burqa while he sought to attack someone over a debt issue. The incident happened in the suburbs of Colombo in a market complex in Welikada, the report says.