President Donald Trump during a visit to the headquarters of the American Red Cross in Washington on Thursday, July 30, 2020. (Doug Mills/The New York Times)

The H1B visa, most sought-after among Indian IT professionals, is a non-immigrant visa that allows US companies to employ foreign workers in speciality occupations that require theoretical or technical expertise.

In a huge blow to Indian IT professionals eyeing the US job market, President Donald Trump on Monday signed an executive order preventing federal agencies from contracting or subcontracting foreign workers — mainly those on H-1B visa — from hiring.

The move came over a month after the Trump administration in June 23 suspended the H-1B visas along with other types of foreign work visas until the end of 2020 to protect American workers in a crucial election year. The new restrictions took effect from June 24.

The H1B visa, most sought-after among Indian IT professionals, is a non-immigrant visa that allows US companies to employ foreign workers in speciality occupations that require theoretical or technical expertise.

The technology companies depend on it to hire tens of thousands of employees each year from countries like India and China. 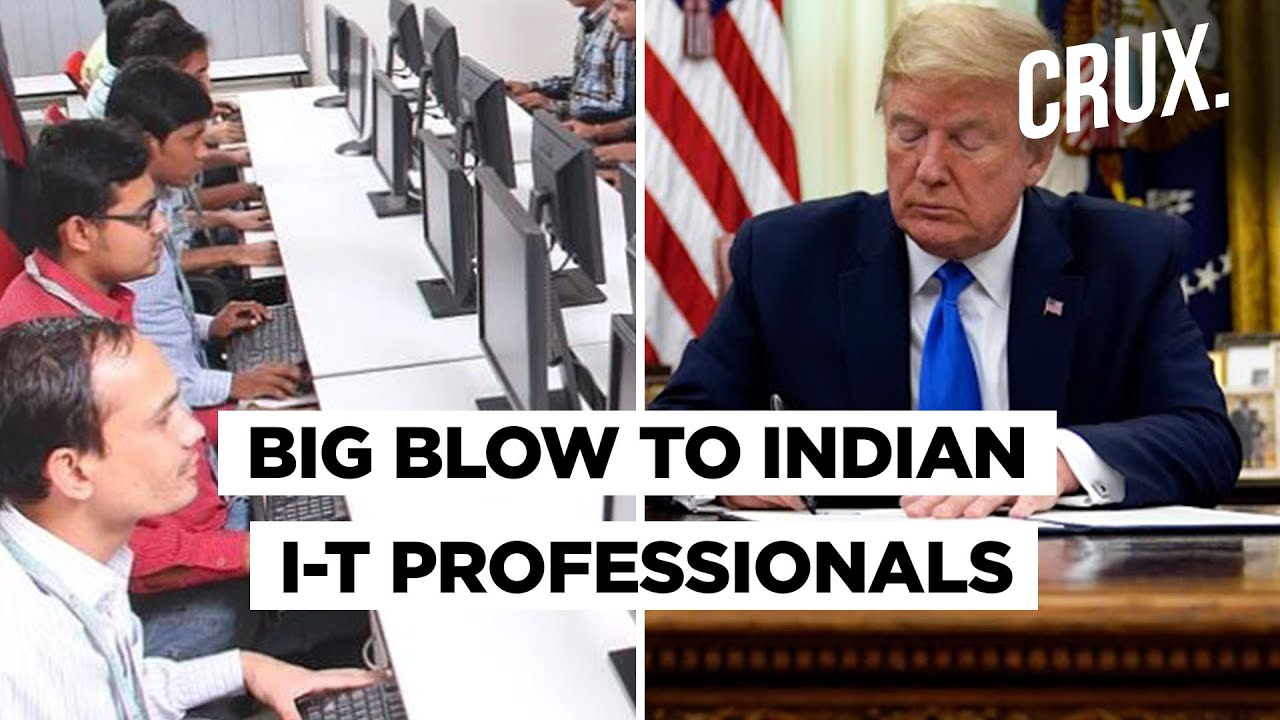 "Today I am signing an executive order to ensure that the federal government lives by a very simple rule, higher American," Trump told reporters in the Oval Office of the White House before signing the order against hiring H1B visa holders for federal contracts.

Trump told reporters that his administration will not tolerate firing of hardworking Americans in the pursuit of cheap foreign labour.

"As we speak, we're finalising the H-1B regulation so that no American workers be replaced ever again. H-1B should be used for top highly paid talent to create American jobs, not as inexpensive labour programmes and destroy American job," said the president who was surrounded across the Cabinet Room table with individuals campaigning against job outsourcing.

Prominent among them were Sara Blackwell, founder and president of Florida-based Protect US Workers organisation; Jonathan Hicks, a software engineer in the Tennessee Valley Authority; and Kevin Lynn, founder of Pennsylvania-based US Tech Workers.

The executive order requires all federal agencies to complete an internal audit and assess whether they are in compliance with the requirement that only US citizens and nationals are appointed to the competitive service. As a result, the Department of Labour will also finalise guidlines to prevent H-1B employers from moving H-1B workers to other employers' job sites to displace Americans workers.

Trump's order follows the federally-owned Tennessee Valley Authority's (TVA) announcement that it will outsource 20 per cent of its technology jobs to companies based in foreign countries.

TVA's action could cause more than 200 highly-skilled American tech workers in Tennessee to lose their jobs to low-wage, foreign workers hired on temporary work visas, the president said.

Outsourcing hundreds of workers is especially detrimental in the middle of a pandemic, which has already cost millions of Americans their jobs, the White House said in a statement.

Given the current climate of rampant intellectual property theft, outsourcing IT jobs that involve sensitive information could pose a national security risk, it said.

According to the White House, Trump's actions will help combat employers' misuse of H-1B visas, which were never intended to replace qualified American workers with low-cost foreign labour.

One of the participants present during the signing of the order told the president that as many as 70 per cent of the H-1B visa goes to people from India.

Trump said he favours a merit-based immigration system that brings in high-skilled people that creates jobs inside the US and not take jobs of Americans.

"We are going to be discussing very shortly an immigration bill, which covers this and many other things. It will be a very, very comprehensive bill. It's a word that some people love, and some people hate. But it'd be very comprehensive only in the sense that it covered just about everything. It will be based on merit. It will cover territory that nobody would have thought could have ever been agreed to," Trump said.

The bill, he said, will be signed after the convention.