Built in 1356, the shimmering, golden dome of the shrine can be seen from miles away.

Pakistan’s, and in particular Sindh’s, union with Islam, Sufism, and Hinduism dates centuries back.

Pakistan’s, and in particular Sindh’s, union with Islam, Sufism, and Hinduism dates centuries back. Sitting along the west bank of the Indus River in Sehwan Sharif is the famous shrine of Lal Shahbaz Qalandar (Jhulelal) — a Sufi saint revered in many forms across religious sects. The multifarious synergy between Shahbaz Qalandar and Jhulelal, the Hindu deity, has resulted in countless mystic tales surfacing across Sindh and the rest of Pakistan.

These tales of cross-religious altruism and harmony have prompted millions of visitors to the shrine – myself being one of them.

The fused and fluent culture of Lal Shahbaz Qalander’s tomb embraces worship, spiritualism, poetry, and quite prominently, music in the form of Dhamaal.

Every Thursday, as the sun sets after the Maghreb prayer, the entrancing beat of the rhythmic drum meanders through the town of Sehwan, slowly getting louder as you approach the Shrine’s gate. What follows is a classic case of religious transcendence. 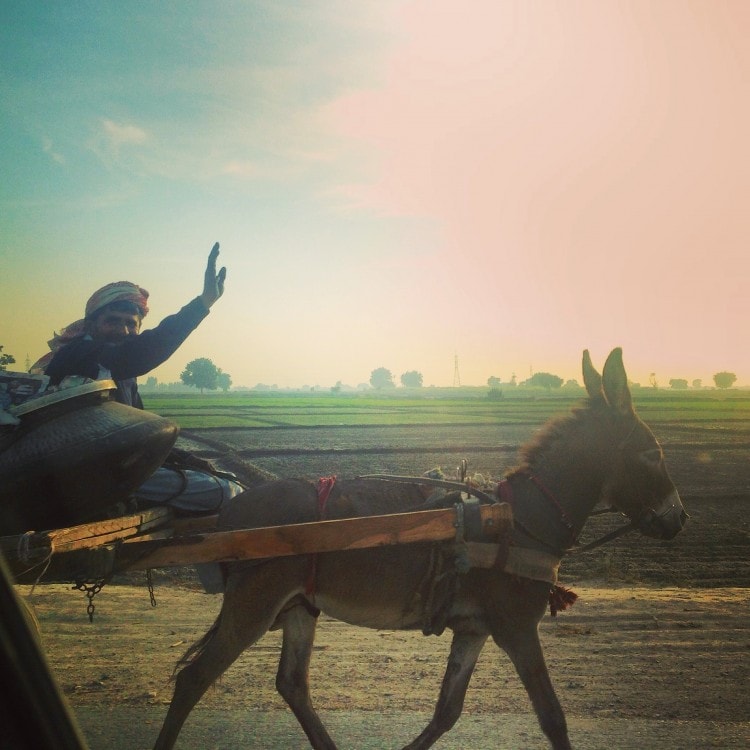 While tracing your way along the Indus River towards Sehwan Sharif, one can already experience the warm-welcome from the locals – imitating the philosophy of Lal Shahbaz Qalandar himself. 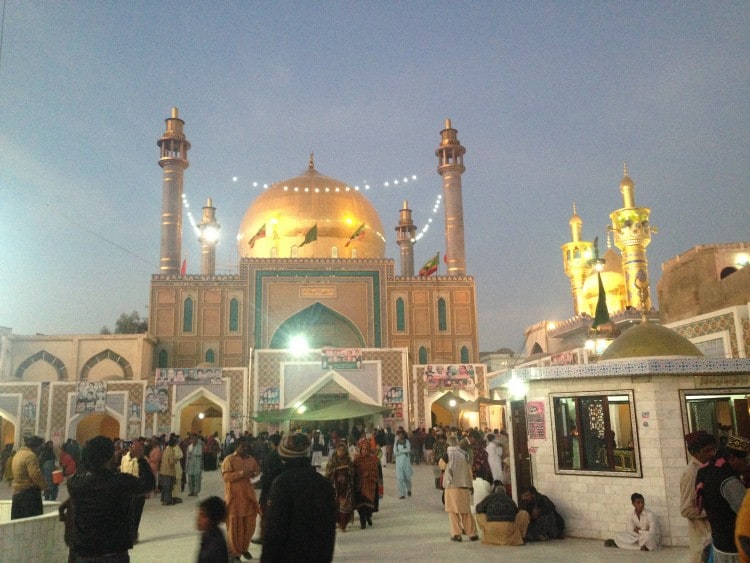 Built in 1356, the shimmering, golden dome of the shrine can be seen from miles away. 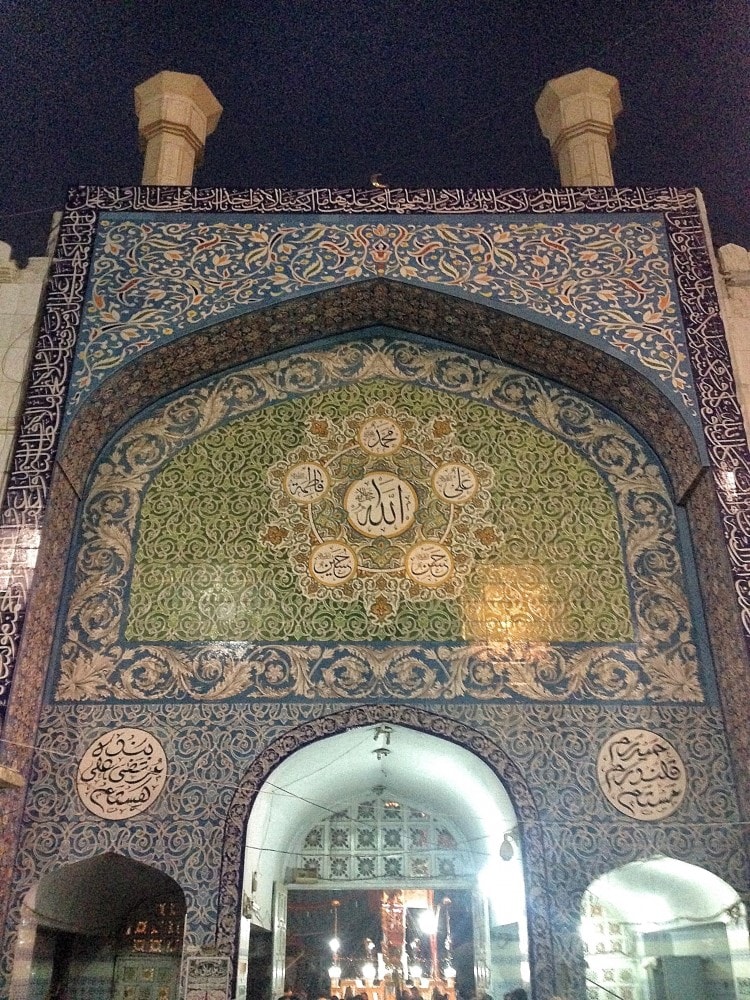 The shrine has gone through various upgrades since its foundation. Here, the intricate ‘Kashi-tiles’ are reminiscent of Persia’s influence on Lal Shahbaz Qalandar. Much of the Shrine’s recent decoration is owed to the Shah of Iran’s donation. Unlike most Islamic sites around the world, this Shrine is not gender segregated – a testament to Sindh’s long-standing progressive values. The inner sanctum of the Shrine is much quieter than the outer-courtyard, where the Dhamaal takes place. Here, worshippers pay their religious dues to the Sufi Saint and indulge in Zikr, a form of rhythmic devotion. Next to the grave, devotees scramble to get a few drops of the ‘blessed’ rose water (Arq-e-Gulaab), commonly thought of as a body cleanser at Sufi shrines across Pakistan. 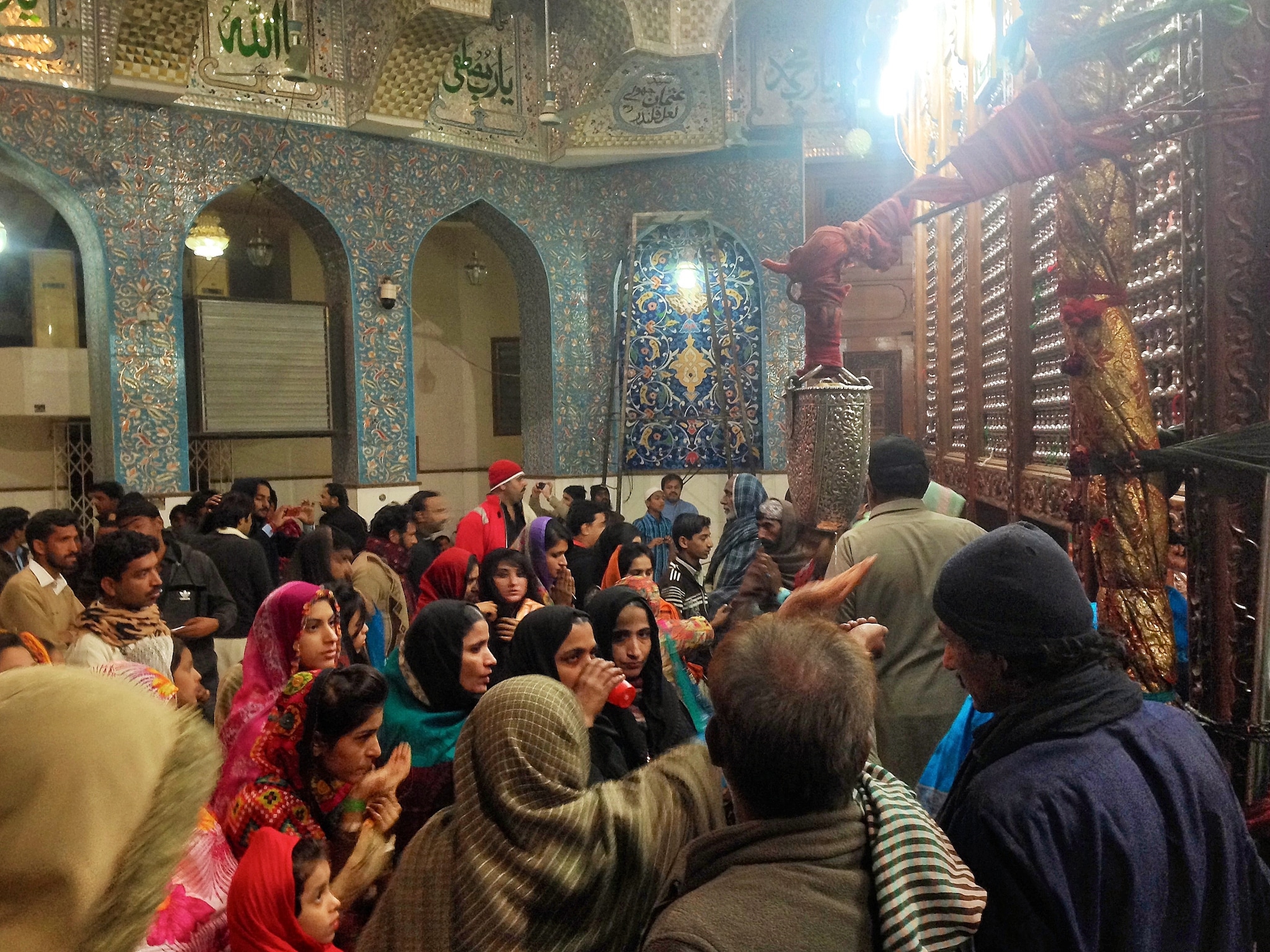 Female worshippers reach for the rose water dispenser, tied to the grave of Shahbaz Qalandar. A visit to the Shrine acts as a form of both bodily and spiritual cleansing. Each Thursday, the outside courtyard is filled with worshippers dancing and whirling to the beat of the drum – the act is known as Dhamaal. 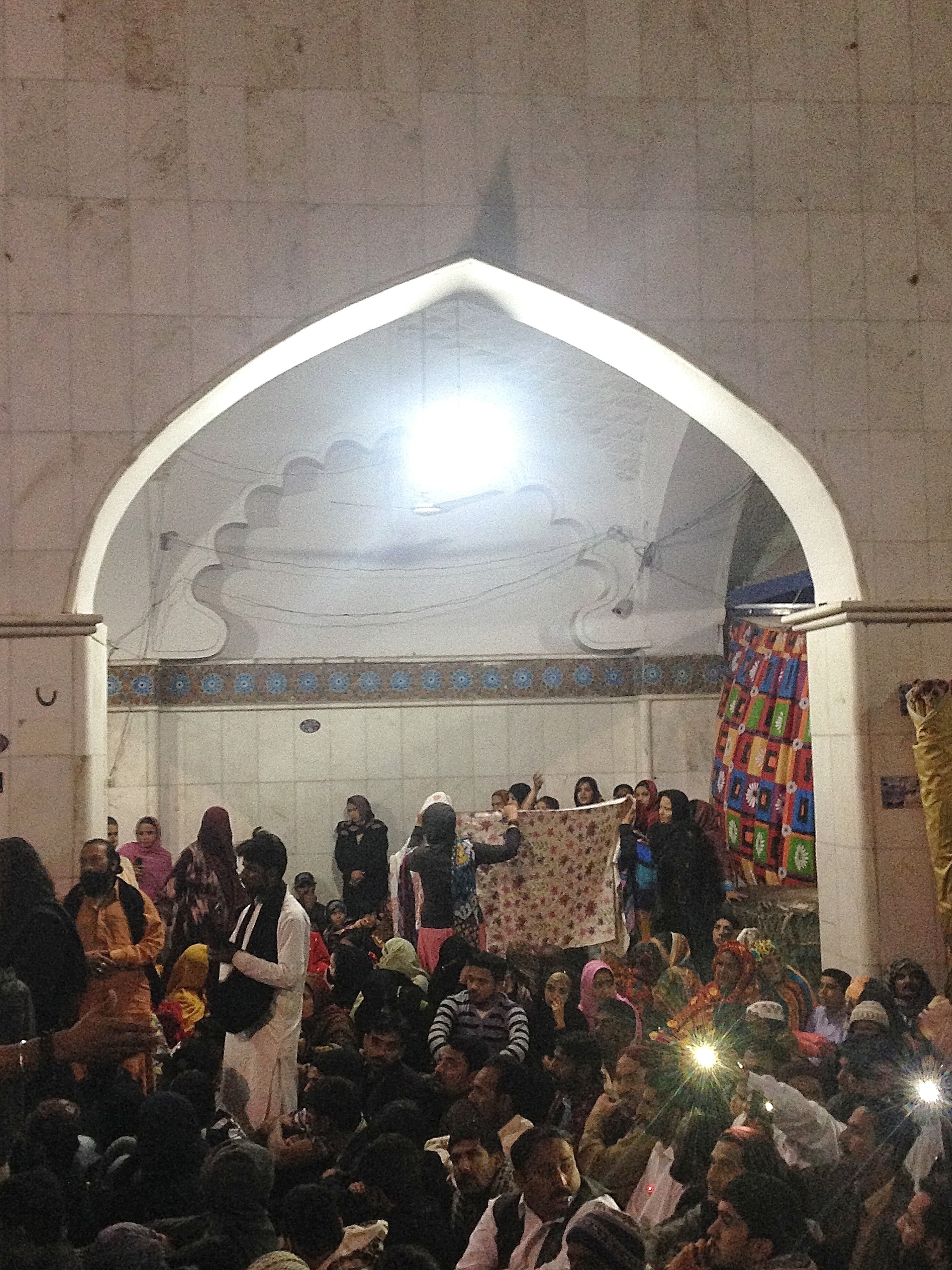 A local female devotee in a state of trance during the dhamaal – the piece of cloth acts as a veil to cover her body. The woman had lost all sense of being and surrounding as she whirled to the hypnotizing percussion. 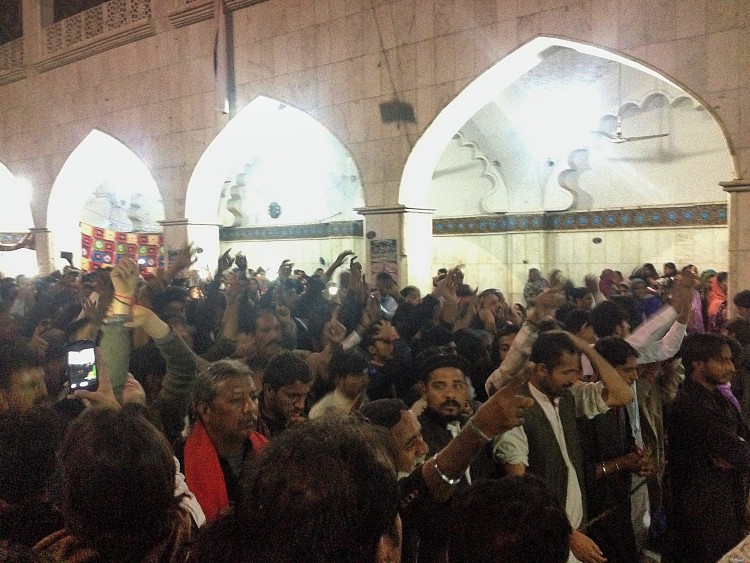 Worshippers during dhamaal reaching out for the sky, asking for Shahbaz Qalandar’s blessings and chanting Hazrat Ali’s name in remembrance. 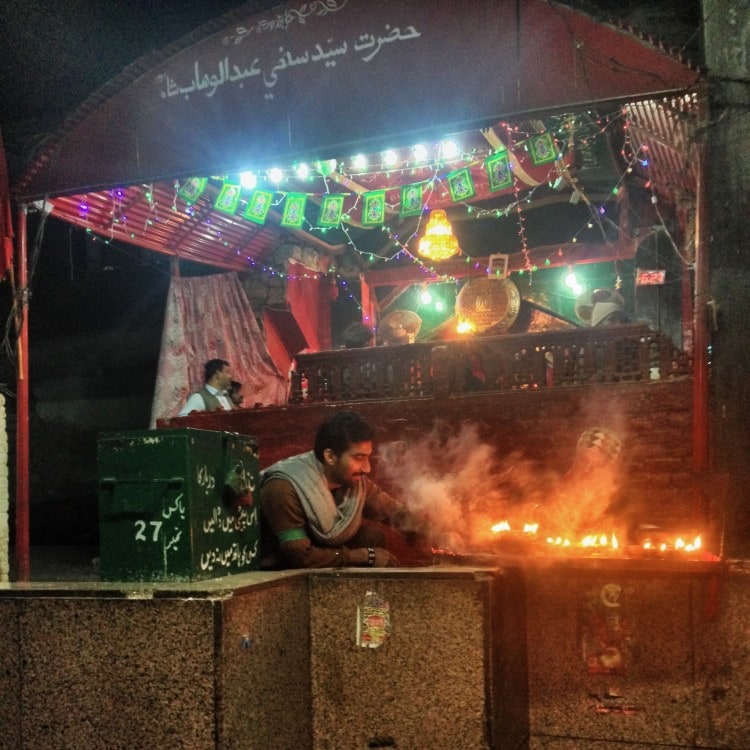 The Shrine is illuminated with earthen oil lamps – a custom found common in both Hindu and Muslim rituals. Devotees can pay any amount as Sadaqah, charity, and light an oil lamp at the Shrine. This reminded me of the famous words by Amir Khusrow uttered in Lal Shahbaz Qalandar’s honour – ‘Chaar charaag tere baran hamesha, Panjwa mein baaran aayi bala jhoole laalan’ [Translation: Your shrine is always lighted with four lamps, And here I come to light a fifth lamp in your honour] The Shrine is paramount to Sehwan Sharif’s retail economy. Locals sell varieties of dried fruit and chadars as a form of Sufi offering. 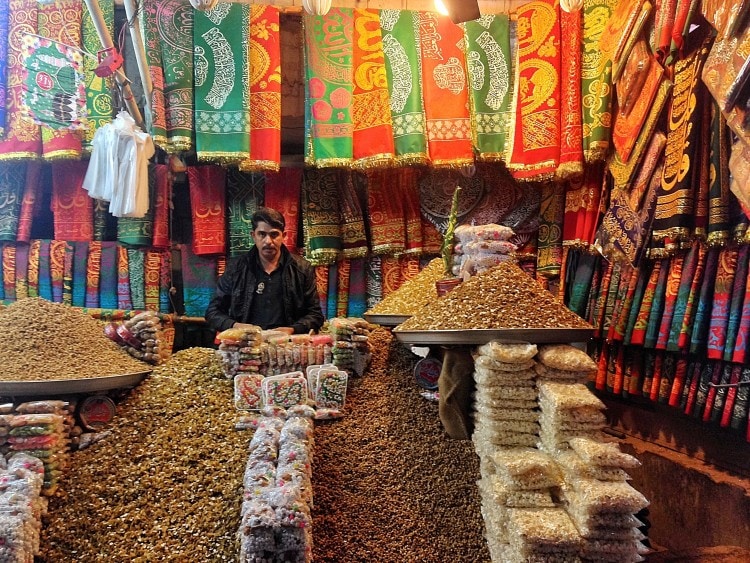 Local dried fruit and sweets are a favorite for millions of worshippers that visit the Shrine each year. With over a million visitors each year, Sehwan Sharif is bound to bounce back despite the recent unfortunate incident. A day after the bombing, devotees returned to the Shrine as a sign of defiance and sent a clear message to the terrorists who have tried to mar the inclusive Sufi heritage of Pakistan – ‘The Dhamaal will continue, and must continue.’