As Kamala Harris Makes History, A Look At 8 Prominent Female Leaders The World Has Seen

Harris’s climb to one of the most powerful political positions in the world has given women and girls across the world hope of breaking the glass ceiling in their own right.

However, over many decades in the modern world, women have led countries including in India, Pakistan, Bangladesh, Germany and other countries. At the same time, there have been several countries like China, Saudi Arabia, Mexico, Russia and Italy that have never had a woman head of state. The United States too has never seen a woman president. While Democrats were hopeful of changing that in 2016 with Hillary Clinton, Trump came to power.

Also read: Kamala Harris And Her Family: Get To Know The Second Family Of The US

In light of Harris becoming the first woman vice-president of the US, here’s a look at eight prominent women heads of state:

The 40th prime minister of New Zealand, Ardern has been in the news for all good reasons during the months of the Covid-19 pandemic. She received praises from all quarters for her leadership during the pandemic, managing to keep the number of infections in her country in check and declaring the country Covid free as even the most powerful countries in the world were trying to come to terms with the virus. It must be noted that the country has had many female prime ministers with Dame Jennifer Mary Shipley being the first. Jacinda Ardern in a file photo.

Tsai Ing-wen made history in 2016 when she was elected Taiwan’s first female president. She is currently serving office and is a member of the Democratic Progressive Party. She made it to the Forbes list of the world’s most powerful women and was also praised for her strategy to fight Covid-19.

Merkel has been the Chancellor of Germany since 2005 and was the first woman to hold the post. Merkel has also served as the leader of the Christian Democratic Union (CDU) from 2000 to 2018. Merkel has been topping the Forbes list of the world’s most powerful women since 2006, and was on top even in 2020. 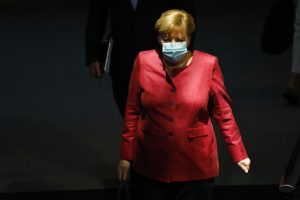 Angela Merkel in a file photo.

Sheikh Hasina is the incumbent prime minister of Bangladesh and has held the post since 2009, and has served in the post multiple times. Her first stint as prime minister was 1996 to 2001. She came to power for the second time in 2009 and has been in power since, making her the longest serving prime minister of the country.

Indira Gandhi was the first and only female prime minister of India. Knowns as the ‘Iron Lady’ of India, Gandhi served as prime minister from January 1966 to March 1977 and again from January 1980 to 1984, when she was assassinated. She wasn’t always looked at as a powerful leader — with socialist leader Ram Manohar Lohia calling her a goongi goodiya (dumb doll) during the first year of her tenure. However, things changed during her political career and she was often criticised for her harsh decisions. It was during her tenure that she proclaimed The Emergency during 1975 to 1977, which is looked at as few of the darkest days of Indian Democracy. Benazir Bhutto served as Pakistan’s prime minister from 1988 to 1990 and from 1993 to 1996. She was the first woman leader to become head of state in a Muslim majority nation. A member of the Pakistan Peoples Party, Bhutto was assassinated in December 2007. Bhutto was in many ways connected to India, being a friend of the Nehru-Gandhis.

Suu Kyi is the first and incumbent state counsellor of Myanmar and won the Nobel Peace Prize in 1991. While she played a pivotal role in bringing partial democracy to her country from a military junta, her handling of the Rohingya crisis has been her fall from grace. She has been criticised internationally for not standing up to the persecution of Rohingya Muslims in the country. She has an old India connection as she studied in New Delhi’s Jesus and Mary College and Lady Shri Ram College and was also the Burmese Ambassador to India in 1960. Recently brought back to public memory with her portrayal in Netflix TV series The Crown, Margaret Thatcher was the first woman to hold the office of prime minister in Britain. She served as prime minister 1979 to 1990. Her domestic and foreign policies during her time at Downing Street were harshly criticised. She faced push back from the members of her own party and was forced to resign in 1990.