In this photo, the Hellfire R9X missile tore a hole through the roof of this sedan (right) where ex-deputy leader of al-Qaeda Abu Khayr al-Masri was seated killing him in 2017 (Image: Charles Lister/Twitter/AP File)

There are reports that it is a secret weapon used by the CIA and the Pentagon, but this weapon was used to kill few high-profile, most wanted terrorists before being used to kill al-Zawahiri.

What Is the Hellfire R9X Missile? How Does it Work?

The Hellfire R9X missile is the modified version of the well-known Hellfire missile. The missile was an anti-tank weapon developed in the 1980s and then was modified several times, especially after the 9/11 attacks, to target individuals.

The R9X variant of Hellfire has several special abilities. According to officials speaking to the Wall Street Journal in a 2019 report, they described that being targeted by the HellfireR9X is equal to a speeding anvil falling from the sky.

Weapon CIA used to get al-Zawahiri. Kinetic Hellfire R9X. No warhead explosives, just blades that swing out to kill only one guy. pic.twitter.com/0dwkC40003

The missile is designed to plunge more than 100 pounds of metal, be it car roofs or buildings, in order to eliminate its target and does so without harming nearby individuals and structures.

This is reportedly an image from the scene of the strike, in #Kabul's Sherpur neighborhood.

The apparent lack of explosive damage may suggest the U.S. used an R9X 'flying ginsu' missile, which is inert & carries self-deploying blades to kill a target with no collateral damage. pic.twitter.com/LLI31wT3Oe

The most lethal aspect of the R9X is the halo of six long blades which are packed inside that deploy through the skin of the missile moments before impact to ensure that it shreds anything in its tracks.

Its earlier version used to leave scorch marks and debris, the R9X leaves no such signature. It is slightly longer than five feet and weighs just over 45 kgs.

Was it Used Before?

The Hellfire R9X missile was used in other operations before killing al-Zawahiri over the weekend. The weapon was used to kill Jamal al-Badawi, in January 2019 and Ahmad Hasan Abu Khayr al-Masri, in February 2017.

Al-Badawi was part of the team, commanded by Ayman al-Zawahiri, that was behind the bombing of the USS Cole. He was in Yemen when the Pentagon used the R9X missile to eliminate him. 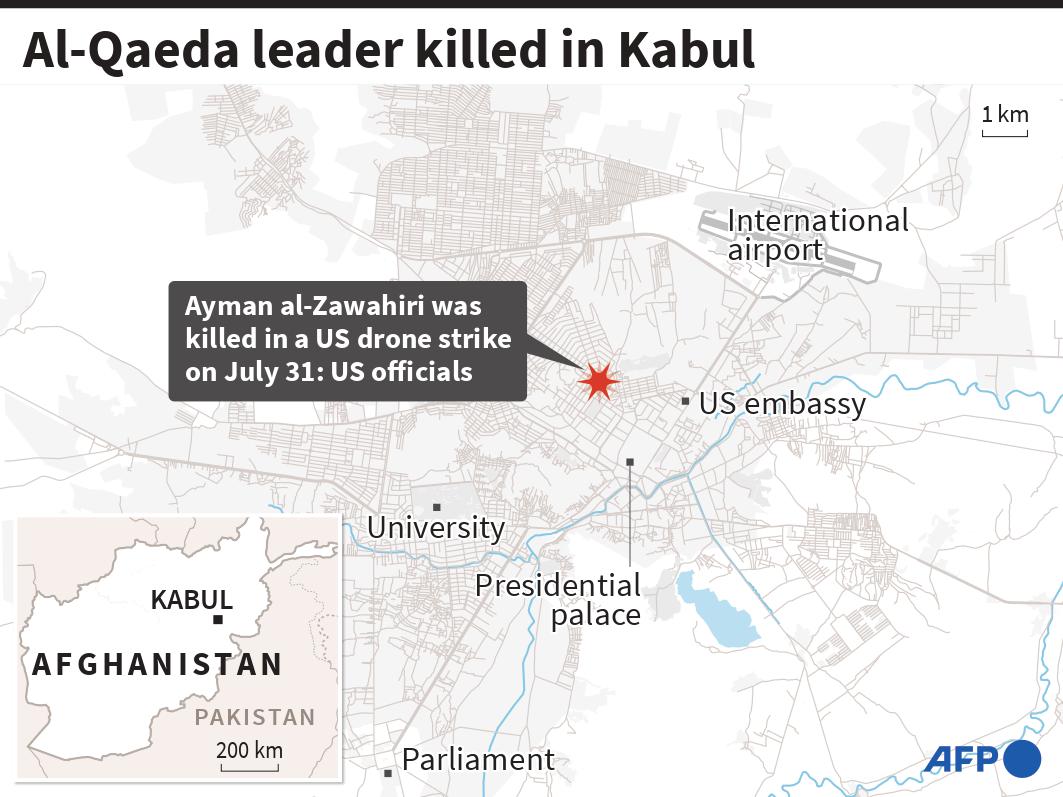 But it was al-Masri’s death which showed the world how the R9X could kill the targeted person without damaging anything nearby. The R9X killed the former al Qaeda deputy leader after tearing a hole through the roof of the Kia sedan on which he was travelling in Syria’s Idlib Province. He was killed by the CIA but the CIA seldom acknowledges the airstrikes it carries out.

This was used half a dozen times by the US to kill high-value targets or groups of wanted individuals in operations in Libya, Syria, Iraq, Yemen and Somalia.

Why was it developed and Why is it called the Flying Ginsu?

The modified version of the Hellfire missile was developed when the former president Barack Obama was in office. The aim of the Hellfire R9X missile was to decrease civilian deaths. The US airstrikes in Afghanistan, Pakistan, Iraq, Syria, Somalia, Yemen and other countries throughout the past decades have led to deaths of civilians and at times women and children, leading to widespread condemnation.

“When taking action, there must be near-certainty that no civilians will be killed or injured,” former president Obama is reported to have said at the time of its development, the Wall Street Journal reported.

The weapon was also developed to eliminate doubts regarding the structural integrity of a building, such as a mud-and-thatch hut where terrorists can hide.

A group of individuals gave it the nickname of ‘flying ginsu’ as a tribute to the popular knives sold on TV infomercials shown on American television in the 1970s and 1980s. It is also a reference to the blades that can cut through buildings or car roofs and kill the target.

(with inputs from the Wall Street Journal)