A tourist walking with an elephant in Sauraha, Chitwan. (News18)

Elephants are an inevitable part of everyday life in Nepal and they are highly respected and attributed to playing a crucial role in the conservation parks and wildlife in the Himalayan country.

Chitwan: Elephants are an inevitable part of everyday life in Nepal and they are highly respected and attributed to playing a crucial role in the conservation parks and wildlife in the Himalayan country.

Elephant tourism has been the key factor in not just financing the parks’ survival but also in financing the reintroduction of rare one-horned rhinos and Royal Bengal tigers here. Not to mention the breeding of elephants themselves.

While elephant tourism ethical or not has provided mass employment to Nepalis and the protection of the National parks without which the poaching of the tigers and rhinos would return to the 1970s-1980s level, the tourism seems quite different from that of Thailand or Kenya, according to the article published by Dave from the Longest Way Home.

Nepal is a country with very little income. Yet, it’s turning away the easy profits of Thai-style elephant tourism in favour of elephant and national park conservation. Deepak Bhattarai, President of the United Elephant Cooperative, Chitwan told us how elephants have been playing such an important role in patrolling the area for poachers along with the park rangers. “There’s been no poaching of rhinos now for three straight years. In fact, Nepal is one of the few rare places in the world where elephant, tiger and rhino populations are increasing. The elephant tourism in Nepal is different from the rest of the world because without the elephant tourism in Chitwan, there would be no national park, tigers or rhinos here,” said Bhattarai.

He also cited examples of Thailand still fighting to get drugged tigers out from the Tiger Kingdom and to stop the elephant rides that reportedly kill tourists every year, and how Nepal is making small but effective strides on ethical elephant tourism.

Roshan Lama, a local from Chitwan and a tourist guide, tells us how Deepak Bhattarai, the new president, has helped initiate a straight 70 per cent change in the policies here since he took over the leadership.

Bhattarai has overseen some radical changes, which now means that there are no more chained-up private elephants during the day in Chitwan. Yes, bull elephants are still chained as they are otherwise uncontrollable if there are females around.

“Keep in mind that bull elephants also come in from the wild at night. So there’s an ongoing need to protect both villages and other elephants alike. Mahouts are no longer allowed to use metal hooks on elephants. Now, only wooden sticks are allowed,” said Roshan.

Two baby elephants have already been successfully raised using non-traditional methods. In other words, the traditional method of beating a calf and keeping it from its mother to “break it in” is no longer the preferred method in Chitwan.

Roshan Lama tells us that Bhattarai has also introduced a “mahout of the year” contest for the mahout who looks after his elephant the best using these new methods throughout the year. An elephant walk with Santikali, a 60-year-old jumbo, in Chitwan National Park. (News18)

Asked how elephants play such an important role in boosting the tourism of a country and why this shift to the ethical elephant tourism here, Bhattarai said: “No matter what we do, animal rights activists are never happy. We are years ahead of places like Thailand and still they want an outright ban on elephants with tourists here.”

The United Elephant Cooperative has challenged the animal rights groups to come up with a way to fund the national park, to give the mahouts a new livelihood, to look after the elephants and pay for their feeding and medical expenses. And, to help patrol the national park. He has been met with silent suggestions.

The organisation also challenged them to deal directly with the government. “If you ride an elephant, are you helping or harming the elephant? In Thailand, I wouldn’t go near an elephant. I’ve seen how they are treated and I strongly disapprove of this treatment. Maybe Europeans or North Americans visiting Chitwan could discuss horse racing or dog racing or bull riding in their own countries before criticising Nepal’s ethical elephant tourism? Or the Spanish/ Mexicans on bullfighting? Fox hunting in the UK and more,” added Bhattarai.

Moreover, it’s quite easy to spot park rangers taking elephants out for patrols to protect the parks from the poachers in the night and thus, helping in increasing the rhino and tiger population. Only few people know that traditionally, a mahout lives taking care of one elephant for his entire life and they form such a strong bond that only breaks with his death.

It’s impossible to spot an elephant being chained and dragged in the streets or being taken into various resorts and made to paint pictures or balance on giant swings of Kathmandu or the lake town of Pokhara. One can spot elephants mostly at Chitwan National Park and in other conservation parks such as one in Bardia throughout the day and night roaming around as freely as humans. In fact, elephants in Chitwan can be hired for one-hour jungle safaris and for 30 minutes to an hour elephant walks, elephant baths twice every day. “We rent an elephant or two from the local owners here for 3000 NPR per elephant and on the request of tourists, take them out for an hour-long walk in to the jungle and for a bath for 1800 NPR per tourist almost every day. We take the elephants for a walk till the Rapti River and it’s a delight to be walking with the elephants matching your step with theirs in absolute silence. This kind of experience helps you to communicate with nature instantly,” said Coranne Plummer, animal rights activist and a volunteer with Hands To Help, an NGO that works towards the well-being of elephants in Nepal.

Plummer and other volunteers at the Hands To Help plan to own an elephant soon. “It is quite an expensive affair to own and we are planning to have Santi Kali who has just turned 60 after paying $10,000-15,000 to the owner. We have already conducted over 25 walks in the past couple of months by generating awareness on how an elephant ride causes so much harm to the animal but only few people are able to understand completely and agree. Most of the tourists just want to land here and jump on an elephant’s back and ride away in the jungle, which needs to stop at the earliest,” adds Plummer. 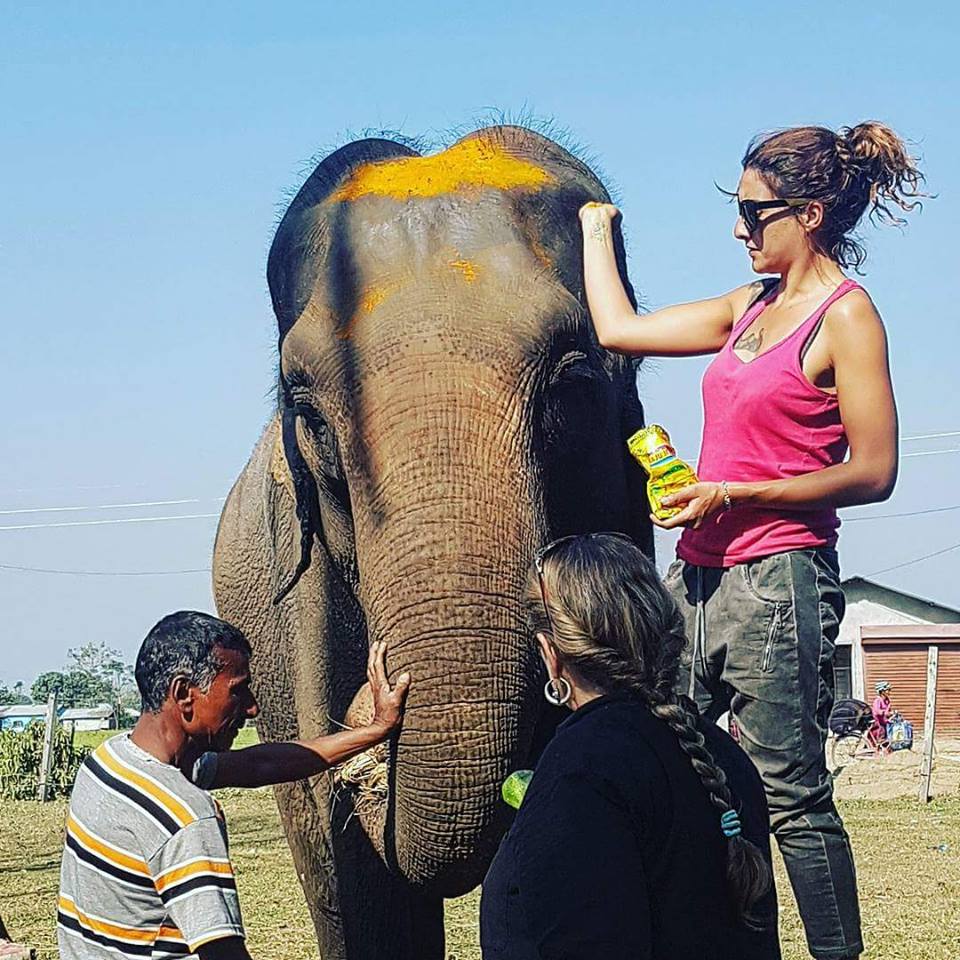 Floriane Blot, an elephant lover, veterinary assistant and zookeeper from Saint Dizier, France who also works at the Chitwan National Park for two-three months every year, shares her experience of the jumbos here. “The experience that you gain while walking with the elephants in the jungle all the way to the river and see them bathing in the river and the love for swimming will just leave anybody with an everlasting impression. It is anyday a better idea to walk with an elephant and respect the giant animal than just enslave it by riding them and kicking them,” said Blot.

Floriane provides pedicure to elephants and takes care of the open wounds on the giant animal’s body that gets injured every day. “There are sometimes snails stuck in the nails of the elephants or sharp objects such as pins, small stones, nails and more that cut into the elephant’s spine, elbows and feet. We want the mahouts to stop riding the elephants and kick them or beat them up all the time for the sake of earning some money. In fact, the mahouts know the animals as they spend their entire lives taking care of these animals and they know them the best so they can also encourage people in taking elephant walks in the jungle all the way to the river and ask the animal lovers to help him give a bath to the jungle king,” added Blot.