No, This is Not an Ancient Bible or Quran Found at the Bottom of the Ocean

The book is a work of art by the US artist Catherine McEver, created by using a cleaning product to grow crystals on German-English dictionary.

Social media posts shared thousands of times purport to show an ancient Bible — or in some versions, a Quran — that is still readable after it was found at the bottom of the ocean. The book is in fact not a religious book but a work by the US artist Catherine McEver. She explained on her blog in 2014 how she created this particular work by using a cleaning product to grow crystals on a dictionary.

Posts claiming the book was a Bible or Quran found underwater hail the supposed discovery as miraculous.

“This is a miracle,” the caption reads. Screenshot taken on June 18, 2019 of Facebook post claiming to show an ancient Bible found at the bottom of the ocean.

Another post on Group Kenya, a public group that has more than two million members, similarly claimed the book was an “ancient bible” found at the bottom of the ocean. Like the first post, it encouraged people to share the image. 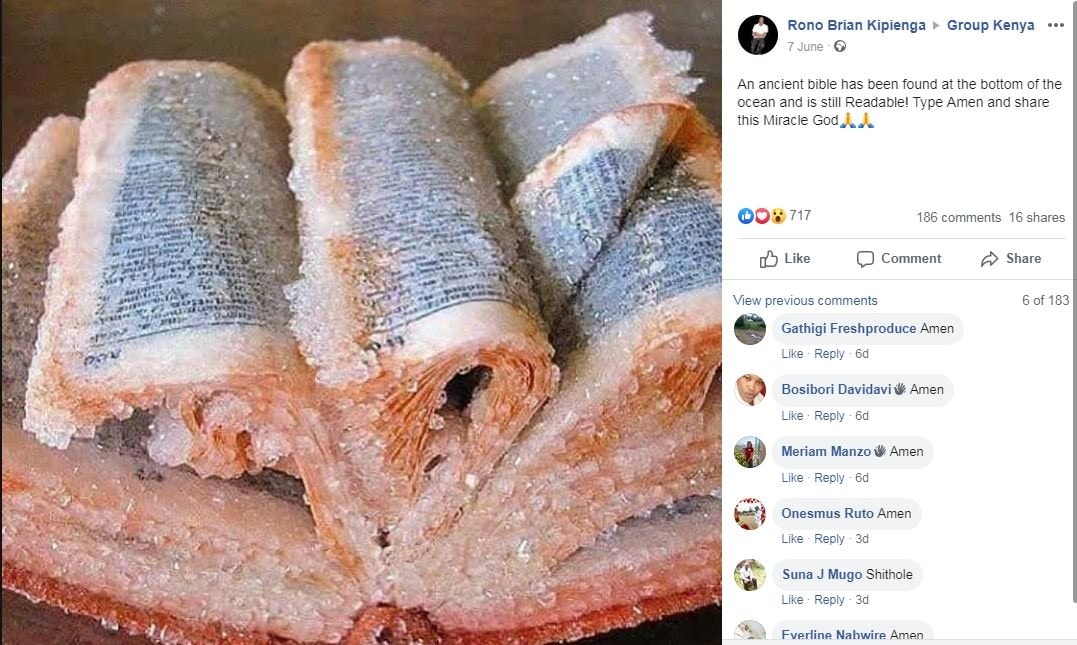 The photo was also posted on Group Kenya, a Facebook group with more than two million members.

Other online posts, like this 2017 tweet which has been shared more than 15,000 times, identified the book as a Quran. Screenshot taken on June 18, 2019 of Tweet claiming to show Koran found at the bottom of the ocean.

But a reverse image search on Google shows that the book is neither a Bible nor a Quran — and nor was it found underwater.

The search located the photo on Stuff You Can’t Have, a blog run by the US artist Catherine McEver.

In a post on May 18, 2014 — before any of the posts identifying the book as a Bible or Quran — McEver described how she created the work by using the cleaning product Borax to grow crystals onto a book.

According to a caption on the blog post, the book is actually a German-English dictionary. 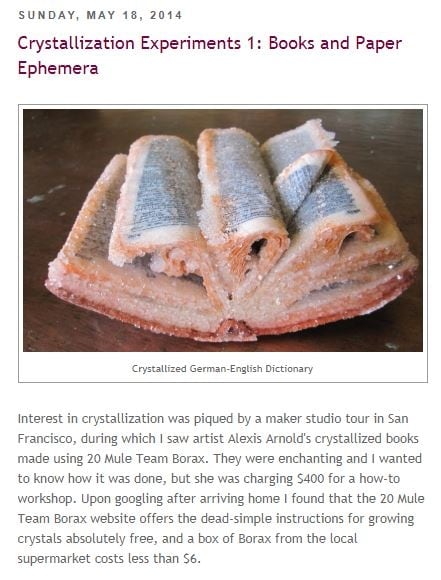 Screenshot taken on June 18, 2019 of US artist Catherine McEver's blog.

The post also includes photos of the book from other angles. A close-up of the artwork as seen on Catherine McEver's blog.

McEver told AFP that she made the crystallised book in 2014 and that the artwork has no religious meaning.

“The book is not a Bible. It is a used, leather-bound German-English dictionary that I bought at a thrift store. I think it is funny that someone is trying to pass on image of my book off as a Bible or some religious miracle,” she told AFP via email.