The decision to ban Jamat-ud-Dawa and Falah-e-Insaniat has been taken just a day before the concluding session of the Financial Action Task Force meeting takes place in Paris.

A spokesman of the Interior Ministry said that the decision to ban these groups was taken during a meeting of the National Security Committee (NSC) chaired by Prime Minister Imran Khan at his office on Thursday. "It was decided during the meeting to accelerate action against proscribed organisations," the spokesperson said in a statement.

"It was further decided that Jamat-ud-Dawa and Falah-e-Insaniat Foundation be notified as proscribed organizations by the Ministry of Interior," he added.

The decision has been taken just a day ahead of the concluding session of the Financial Action Task Force meeting takes place in Paris. According to sources, India has intensified its efforts to get Pakistan blacklisted by the watchdog after the Pulwama attack, for not cracking down on terror financing.

Two Indian government officials dealing with the issue said a new dossier had been provided to the FATF relating to Pakistan after the car bombing last week.

Pakistan was put on the grey list by the FATF in June 2018, and was warned that it may further be downgraded if it does not act against terror groups operating from its soil. If FATF puts Pakistan on the black list, the country’s economy may suffer a huge blow owing to downgrading of ratings.

While there are no direct legal implications from being on the list, it brings extra scrutiny from regulators and financial institutions that can chill trade and investment and increase transaction costs, experts said. 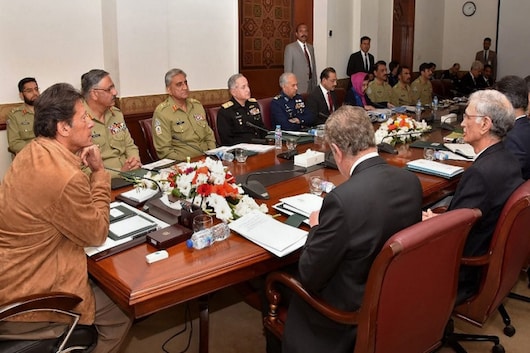 However, it remains to be seen how effective the latest ban would be on the two groups, which have the tacit backing of the political leaders and the security agencies. Earlier, the two outfits were kept on the watchlist of the interior ministry.

According to officials, JuD's network includes 300 seminaries and schools, hospitals, a publishing house and ambulance service. The two groups have about 50,000 volunteers and hundreds of other paid workers.

The JuD is believed to be the front organisation for the LeT which is responsible for carrying out the Mumbai attack that killed 166 people. It has been declared as a foreign terrorist organisation by the US in June 2014.

The US Department of the Treasury has designated its chief Saeed as a Specially Designated Global Terrorist, and the US, since 2012, has offered a USD 10 million reward for information that brings Saeed to justice.

Saeed was listed under UN Security Council Resolution 1267 in December 2008. He was released from house arrest in Pakistan in November 2017.

Pakistan's move comes amid mounting global pressure to act against the terrorist outfits operating from its soil.

Pakistan-based Jaish-e-Mohammad claimed the responsibility of the Pulwama suicide attack that killed 40 CRPF soldiers on February 14.

Last week, Iran asked Pakistan to crack down on militants who killed 27 of its Revolutionary Guards in an attack near the border or expect military action by Tehran "to punish the terrorists".

The NSC meeting also reviewed the National Action Plan against terrorism in detail. Services chiefs and key ministers were in attendance.

"We need to move to ensure that militancy and extremism are rooted from the society and the State never becomes hostage to extremists," Khan said as he directed both the interior ministry and the security institutions to immediately accelerate actions on ground.