Ahead of the final results, Pakistan Tehreek-e-Insaf (PTI) chief Imran Khan said India and Pakistan should work together towards peace and end human rights violation in the region. He addressed the nation as the mandate has turned out to be largely in his favour. Pakistan Tehreek-e-Insaf is leading in over 110 seats as the results keep trickling in. Earlier, speaking to CNN-News18, former Pakistan President Pervez Musharraf voiced his support for the mandate in favour of Imran Khan. Musharraf has also said that Khan has never voiced any discontentment against India. Pakistani cricket hero-turned-politician Imran Khan is leading in projected partial results of the general elections, as the party of his jailed chief rival, ousted Prime Minister Nawaz Sharif's PML-N, rejected the eventual result as "blatantly" rigged. Khan's camp is increasingly getting confident, but still appears likely to fall short of a clear majority in the Pakistan National Assembly. Full results are expected soon.

Meanwhile, Pakistan's former Prime Minister Yousuf Raza Gilani lost to PTI's Mohammad Ibrahim in Multan's Shujabad constituency. Asad Murtaza Gilani, former PM’s nephew, won the seat in 2002. Murtaza died during a stampede while on Hajj in 2015, following which Gilani decided to fight from the seat. According to local media, some political observers believed that Gilani would look for sympathy votes in Murtaza's name. However, his attempt seems to have gone in vain with Imran Khan's PTI inching close to form the next government in Pakistan. On the other hand, Mumbai attack mastermind and Jamaat-ud Dawa (JuD) chief Hafiz Saeed seems to have been rejected by Pakistani voters as none of the candidates associated with extremism in past have leads.

PML-N chief Shehbaz Sharif, who was the prime ministerial candidate of his party after the jailing of his brother Nawaz Sharif in a corruption case, rejected the election results, alleging "blatant" rigging. He did not say who he believes could have rigged the polls, but allegations of manipulating the elections have been made against the country's influential military. 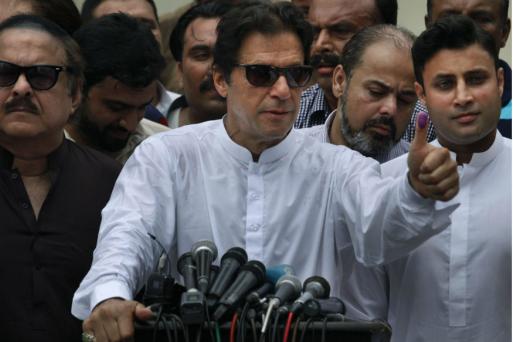 In his speech that was broadcast live via video link, PTI chief Imran Khan today declared victory and promised to make Pakistan's institutions stronger under which everyone will be held accountable.

"First, I will be subjected to accountability, then my ministers and so on. Today we are behind (other countries) because there is a separate system for those in power and a separate one for ordinary citizens," Khan said, as he promised to end the VIP culture and convert the existing PM House into an educational institution.

He also vowed to improve the governance and overcome the economic challenges faced by Pakistan.

The Delay in Results | The inordinate delay in declaring the results of Pakistan's general election was today blamed on a new Android-based mobile application technology tried by the poll authority. The Election Commission of Pakistan (ECP) had deployed a new system called the Result Transmission System (RTS) to ensure swift result transmission from polling stations in Wednesday's elections. The application was manufactured by the National Database and Registration Authority and it was supposed to enable presiding officers to transmit result to returning officers and to the election commission in real-time. A report states that the immediate priority for the new government has to be to correct the economic imbalances.

Welcome the statement of PTI chief @ImranKhanPTI calling for resolution of #Kashmir dispute through dialogue in view of huge human cost of this long standing dispute especially being borne by the people of Kashmir. Hope the two neighbors give real peace a chance!

Tally so far | Pakistan's National Assembly comprises a total of 342 members, of which 272 are directly elected whereas the rest - 60 seats reserved for women and 10 for religious minorities - are selected later through proportional representation among parties with more than five per cent of the vote. Imran Khan’s PTI has won 115 seats so far, followed by Shehbaz Sharif’s PML-N that has won 60 till now. Bilawal Bhutto’s PPP has won 40 and the Others, including Independents, have claimed a substantial number so far – 51 seats.

READ | Not a Bollywood Villian, Want to Improve Ties With India: Imran Khan in First Address After Poll Win New Delhi: Cricketer-turned-politician Imran Khan, whose Pakistan Tehreek-i-Insaf emerged as the single largest party, said on Thursday that Pakistan is ready to improve its ties with India and the blame game between the two neighbours, detrimental to the sub-continent, should come to a stop.

For Pakistani cricket legend-turned-politician Imran Khan, his party's first place in a national election, putting him on the brink of becoming the country's next prime minister, is the culmination of a battle that started more than two decades ago. For years, he was dismissed as a political dilettante who could not convert his personal popularity into significant seats in parliament for the Pakistan Tehreek-i-Insaf (PTI), or Pakistan Movement for Justice, he founded. But Wednesday's election has dramatically changed that, putting the former sports star on the brink of power. With nearly half the votes counted, PTI held a commanding lead and Khan declared victory in a speech on Thursday, writes Reuters. Imran Khan, who is set to become Pakistan's premier, today said he will not live in the official residence of the prime minister and the "lavish" house will be converted into a public space like an educational institution. The 65-year-old chief of Pakistan Tehreek-i-Insaf (PTI) party promised to make Pakistan free of the perpetual rich-getting-richer and poor-getting-poorer cycle and said that "change has to come from the top."

"Our government will decide what we will do with PM House. I would be ashamed to live in such a lavish house. That house will be converted into an educational institution or something of the sort for the welfare of the people," he said. "I will live humbly," he said, promising to end the VIP culture. New Delhi: In her book, Reham Khan talks a great deal about her ex-husband Imran Khan's anguish over the 2014 Azadi March and how he felt that it was about time that he was "given the prize".

Election Commission of Pakistan: Final results will come out within 24 hours. There is no delay. 90% of results have been announced by Returning Officers in the field. We have received 82% of the results.

More than 24 hours passed since polling ended, our PM Select has done his speech, but still no results of Chairman @BBhuttoZardari from #Lyari or #Larkana #WhatsGoingOn #Elections2018

Imran Khan is winning from all 5 seats. Once he becomes the Pakistan Prime Minister, there will have to be by-elections on at least four seats.

Congratulations @ImranKhanPTI . I wish you all the best.

READ | Pakistan's Deep State Selected Imran Khan as PM, But Why He Can't be My Captain Anymore Growing up in the 80s and the 90s, my greatest idol and hero was Imran Khan. But what transpired in the last few months made me decide that I have to cast my vote against him at all costs.

Bollywood actor and a favourite on Twitter, Rishi Kapoor congratulated Imran Khan for his speech and said that he has been saying the exact same things that Khan said in his address.

Well spoken Imran Khan. I have been saying whatever you said on all channels past two days regarding India-Pakistan! I hope you succeed in making your “Mulk” have good relations with my “Mulk” pic.twitter.com/YCe741vW22

Just hearing Imran Khan say his model state existed in Medina in the seventh century. Wonder how far further back our rulers will now want to take us.

Stop 'venomous propaganda', Pakistan foreign office to Indian media | Pakistan on Thursday denounced what it called an uproar triggered by the Indian media over general elections in Pakistan and asked the neighbouring country to focus on its internal affairs. Foreign Office spokesperson Mohammad Faisal said that elections are a part of the democratic process and the Indian media must focus on its internal matters. He urged India to stop propagating "venomous propaganda" against Pakistan. Faisal said that the position of any leading party must be accepted in the wake of the election results, reports IANS.

Polling agents have to be given signed copies of Form 45 - that is the law - after that you can input the form into whatever system - will the ECP please answer why that wasn't done in NA 246 Lyari and why our agents were kicked out: PPP leader Taj Haider.

A special speech from a Great Leader..Very simple, honest and practical..Feeling so proud to be a student of such a Mentor.. Congratulations Skipper @ImranKhanPTI #BehindYouSkipper #NayaPakistan

Imran Khan wants Pakistan to become 7th century's Medina. Good that military will rule, not him. Hope he will not be allowed to drag the country to hell.

I don't see any change because as far as India is concerned, the important matters like export of terrorism by them, are not going to change. Military used to decide this policy & they'll do it now as well: Union Minister RK Singh on #PakistanElections2018 trends in favour of PTI pic.twitter.com/zgNNmpKeSg

As per ECP our final count is 6,109 votes in PS-111 and we stand at 5th behind PTI, MMA, PPP, PMLN & ahead of MQM, PSP, GDA & TLP. We maintain that elections were not transparent and severe irregularities were noted. We don't blame any Party but ECP. We will contest this result: Jibran Nasir, human rights activist.

Pakistan is willing to improve its ties with India, Pakistan Tehreek-e-Insaf chief Imran Khan said today, asserting that the blame game between the two neighbours, detrimental to the sub-continent, should stop. "If they take one step towards us, we will take two, but at least need a start," 65-year-old Khan said in his first public address after leading his party to victory in the general elections held yesterday. Khan said Kashmir is the "core" issue between the two countries and it should be resolved through talks.