Part 1: Power and Politics of Persia

What’s clear is that the Iranian youth is restless.

A bird’s eye view of Iran’s capital Tehran speaks a lot about how it seeks to find its place in the 21st century; cradled between snow peaked mountains, streets lined with luscious greens, and flyovers screaming with pride as the Iranian flags gyrate in the wind. Prior to 1947, Iran and India were immediate neighbors and that is how my grandfather remembers it. I can’t help but think that this is perhaps the trip my grandfather owed to a country whose language he had mastered and a culture he had grown to appreciate.

As I navigate the city through borrowed nostalgia, I am dealing with multiple identities of Iran.

My grandfather’s Persia Pariah state is now under an authoritarian Islamic regime and the new Iran is brimming with energy as underground Tehran. 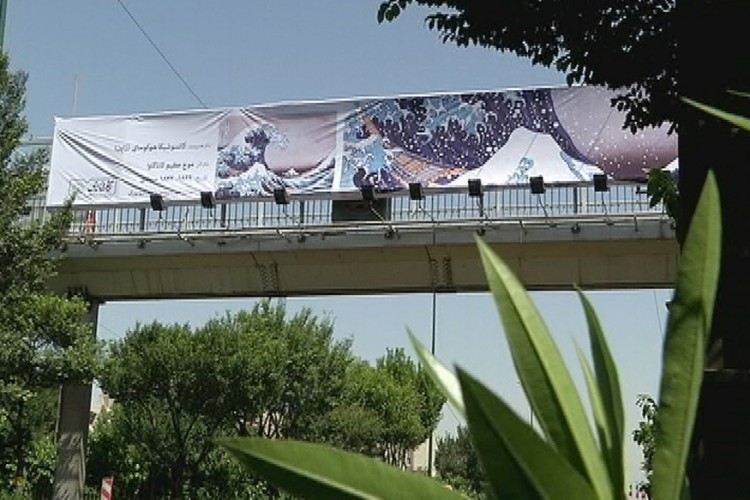 The choice of the beautification element by the Tehran municipality makes me wonder if it is a reflection of the new Iran, one that is desperate to get out of its isolation and join the world and its economy after the U.S. lifted partial sanctions in January 2016. Despite years of sanctions Tehran isn’t in a dilapidated state. The buildings of the Iranian capital aren’t crumbling but stand tall.

Every few kilometers cranes can be spotted busy in constructing a modern Tehran. The edifices are painted thoughtfully in the brown colour of the mud as if recreating the hues of ancient Iran. Nevertheless, the financial loss Iran has had to bear since the imposition of the sanctions cannot be undermined.

Our driver Yakoob conveys stories of financial desperation and lights up while talking about the US-Iran truce.

Even though partial sanctions have been lifted, Iranian officials tell us nothing on the ground has changed.

Dr Marandi’s vehement defence of the IRG aside, other reformist intellectuals we spoke to had no doubt that a part of the money would go to the IRG.

While Tehran we are told was hailed as the region’s Paris under Shah, he was seen as a puppet of the Americans selling energy resources to them for cheap, in turn looting the Iranians.

The revolution of 1979 was mainly owing to the fear of Islamic values being obliterated and also to protest the U.S.' control over their economy and future through Shah. All of which lead to the return of the cleric Ayatollah Khomeini.

THE TRANSITION UNDER THE CLERIC

The Ayatollahs are omnipresent in today’s Tehran. Painted on the walls of the city, hanging in photographs in hotel lobbies, offices, ice cream parlours, you find him everywhere. Not only does he head the armed forces, but also appoints officials to state bodies, including the judiciary and the state media.

At the domestic front, the rise of the clergy meant suppression of the women, with the ban on ‘hijab’ reversed with immediate effect. Self-entitled men of the moral police ‘komiteh’ too harassed women by imposing their own version of Islam. In 1979, the revolution year, Iran under Khomeini had done the diplomatic unthinkable. In one of the darkest episodes in international relations, the top cleric gave a mortifying call ‘Death for America’ after which the Iranian Revolutionary Guard took the 60 Americans hostage inside Iran’s U.S. embassy for over a year. The liberals soon regretted supporting the revolution but before they could raise their voice, Saddam Hussain’s Iraq started showering bombs on Iran, even killing Iranian soldiers with sarin and mustard gas.

Iranians were left with no option but to stand united behind the regime of the day - Ayatollah Khomeini’s mullahs. The patriotic martyrs decorate Tehran’s walls even today, though many were given a high dose of religious fervour, just to be fed as fodder to Saddam’s cannons. US’ support for Saddam further escalated the tensions between the Iranians and the Americans to a different level.

Internally, the crackdown on dissent gained Iran the status of a pariah state.

Akbar Ganji, a famous journalist was jailed for investigating the link of high officials in the government to the murders of authors infamously described as ‘chain of murders’ in Iran. From the prison he wrote a manifesto calling for ‘the end of a theocratic Iran and its replacement with a democratic state.

Another intellectual and advisor to the reformist President Khatami, Saeed Laylaz, was arrested in 2009 as part of a crack down on Iranians protesting against Ahmadinejad alleging election fraud.

Professor Laylaz supported the opposition leader Musawi and gave 20 odd lectures in the Tehran University in his support.

Even though he was released from the prison, the professor is still cautious and thinks it is Khamenei’s power broking skills that are keeping him safe from the hard liners who intend on executing him.

Iran at the moment is divided between conservatives and reformists; not just in economics but also in the social space.

What’s clear is that the Iranian youth is restless.

In the city of scarves I stop by at a local scarf shop, while paying I ask, “would you take a visa card”? He replied, ‘Not yet, but soon, they [the govt] said soon’.

22 years old, English speaking Ahmad is a university graduate without a job and is forced to drive a taxi he rents.

His view of America is directly opposite to that of our regular driver Ali, he says ‘America is a great country’. why I ask, and he answers ‘because of the freedom, economy. Iran government not think like that, but I think different from my government’. I can’t say how many more young men and women await economic and social assimilation with the world. What I can see is the stark difference between the Persian and Arab social space.

It isn’t the Tehran of the 80s or 90s. There is hope and energy in the air, the young are fashionable, assertive and willing to overcoming obstacles, one step at a time.

Iran’s underground Tehran in the second part of Inside Iran.

[[INSIDE IRAN: THE SHOW WILL AIR THIS WEEKEND ON CNN NEWS 18]]