Students walk near the Widener Library in Harvard Yard at Harvard University in Cambridge. The Ivy League school announced Monday, July 6, 2020, that as the coronavirus pandemic continues its freshman class will be invited to live on campus this fall, while most other undergraduates will be required learn remotely from home. (AP Photo/Charles Krupa, File)

The guidelines, issued by US Immigration and Customs Enforcement, provide additional pressure for universities to reopen even amid growing concerns about the recent spread of COVID-19 among young adults.

International students will be forced to leave the US or transfer to another college if their schools offer classes entirely online this fall, under new guidelines issued Monday by federal immigration authorities.

The guidelines, issued by US Immigration and Customs Enforcement, provide additional pressure for universities to reopen even amid growing concerns about the recent spread of COVID-19 among young adults. Colleges received the guidance the same day that some institutions, including Harvard University, announced that all instruction will be offered remotely.

President Donald Trump has insisted that schools and colleges return to in-person instruction as soon as possible. Soon after the guidance was released, Trump repeated on Twitter that schools must reopen this fall, adding that Democrats want to keep schools closed "for political reasons, not for health reasons."

"They think it will help them in November. Wrong, the people get it!" Trump wrote. Under the updated rules, international students must take at least some of their classes in person. New visas will not be issued to students at schools or programs that are entirely online. And even at colleges offering a mix of in-person and online courses this fall, international students will be barred from taking all their classes online. 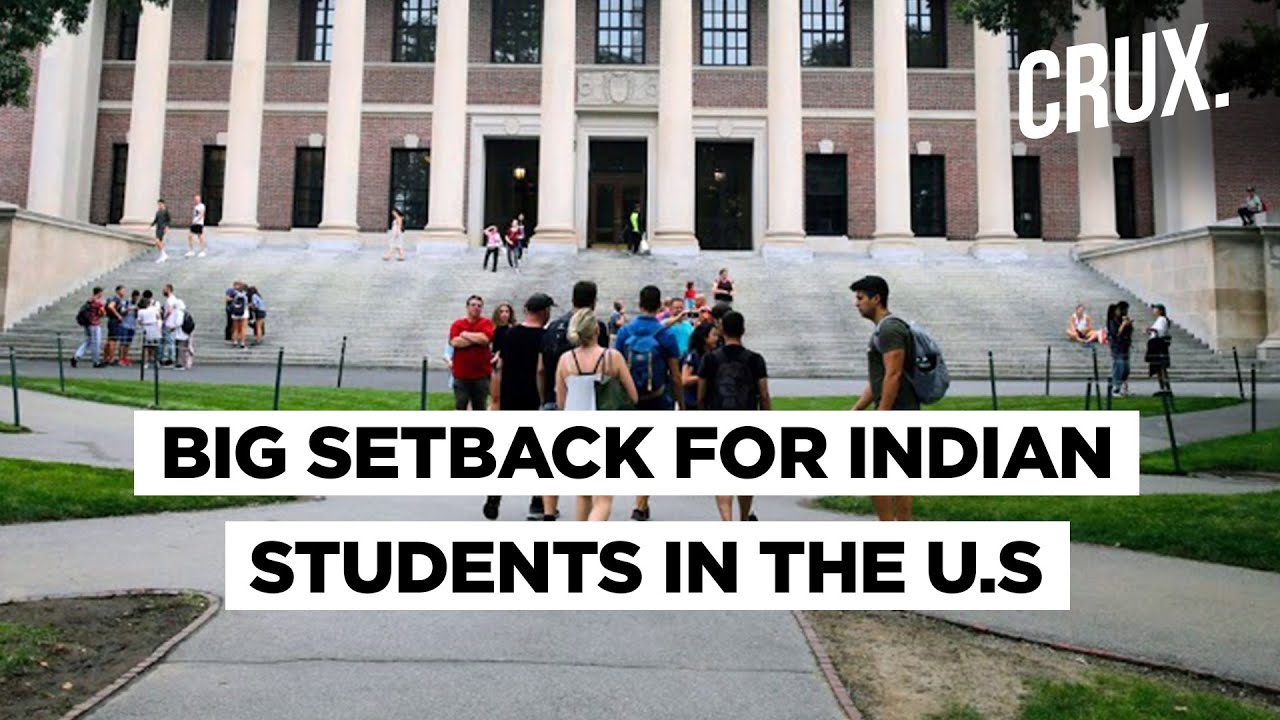 It creates an urgent dilemma for thousands of international students who became stranded in the U.S. last spring after the coronavirus forced their schools to move online. Those attending schools that are staying online must "depart the country or take other measures, such as transferring to a school with in-person instruction," according to the guidance.

The American Council on Education, which represents university presidents, said the guidelines are "horrifying" and will result in confusion as schools look for ways to reopen safely.

Of particular concern is a stipulation saying students won't be exempt from the rules even if an outbreak forces their schools online during the fall term. It's unclear what would happen if a student ended up in that scenario but faced travel restrictions from their home country, said Terry Hartle, the council's senior vice president.

"It's going to cause enormous confusion and uncertainty," Hartle said. "ICE is clearly creating an incentive for institutions to reopen, regardless of whether or not the circumstances of the pandemic warrant it."

The international education group NAFSA blasted the rules and said schools should be given the authority to make decisions that are right for their own campuses. It said the guidance "is harmful to international students and puts their health and well-being and that of the entire higher education community at risk."

Trump's critics were quick to attack the new guidelines. Sen. Bernie Sanders, the Vermont independent, said the "cruelty of this White House knows no bounds."

"Foreign students are being threatened with a choice: risk your life going to class in-person or get deported," Sanders said in a tweet. "We must stand up to Trump's bigotry. We must keep all our students safe."

Dozens of colleges have said they plan to offer at least some classes in person this fall, but some say it's too risky. The University of Southern California last week reversed course on a plan to bring students to campus, saying classes will be hosted primarily or exclusively online. Harvard on Monday said it will invite first-year students to live on campus, but classes will stay online.

Immigration authorities suspended certain requirements for international students early in the pandemic, but colleges were awaiting guidance on what would happen this fall. ICE notified schools of the changes Monday and said a formal rule would be forthcoming.

The announcement was the Trump administration's latest pandemic-related strike against legal immigration. Last month, authorities extended a ban on new green cards to many people outside the United States and expanded the freeze to include many on temporary work permits, including at high-tech companies, multinational corporations and seasonal employers.

The administration has long sought deep cuts to legal immigration, but the goal was elusive before the coronavirus.
Tags: