'Show Absolutely No Mercy': Six Tools of Xi Jinping to Scale up Uighur Genocide in Xinjiang

Xinjiang is an energy hub for China for its coal, gas and crude oil reserves but most of the job opportunities in the sector are closed for Uighurs, a Reuters report states.

Xinjiang Census, part of China Census 2020, released recently shows China has scaled up the state sponsored repression against Uighurs. Chinese President Xi Jinping had warned Uighurs in 2014 - “We must be as harsh as them and show absolutely no mercy” – says a report by the New York Times quoting leaked Chinese documents. And 2021 shows Xi Jinping is well on his way to achieve what he planned for.

The Chinese repression, or we can say genocide of Uighurs, based the on measures taken against them to reduce their population base like forced sterilisations of Uyghur women and suppression of their religious identity, looks certain now, with China under Jinping adopting a multipronged approach towards it.

Demographic invasion of Han Chinese people from other part of China to Xinjiang territory is an eye-opening truth. According to Xinjiang Uighur Autonomous Region statistical yearbook, Han Chinese population in Xinjiang was 6.7% in 1949 which increased to 42.24% according to Chinese Census 2020. Uighur Muslims were 80% of the Xinjiang population in 1941 and around 76% in 1949. They are now reduced to just 45% of the population in the province. China’s latest Census has not released separate data for other ethnic minorities of the region. Together they count for 12.8% of the population of the province. 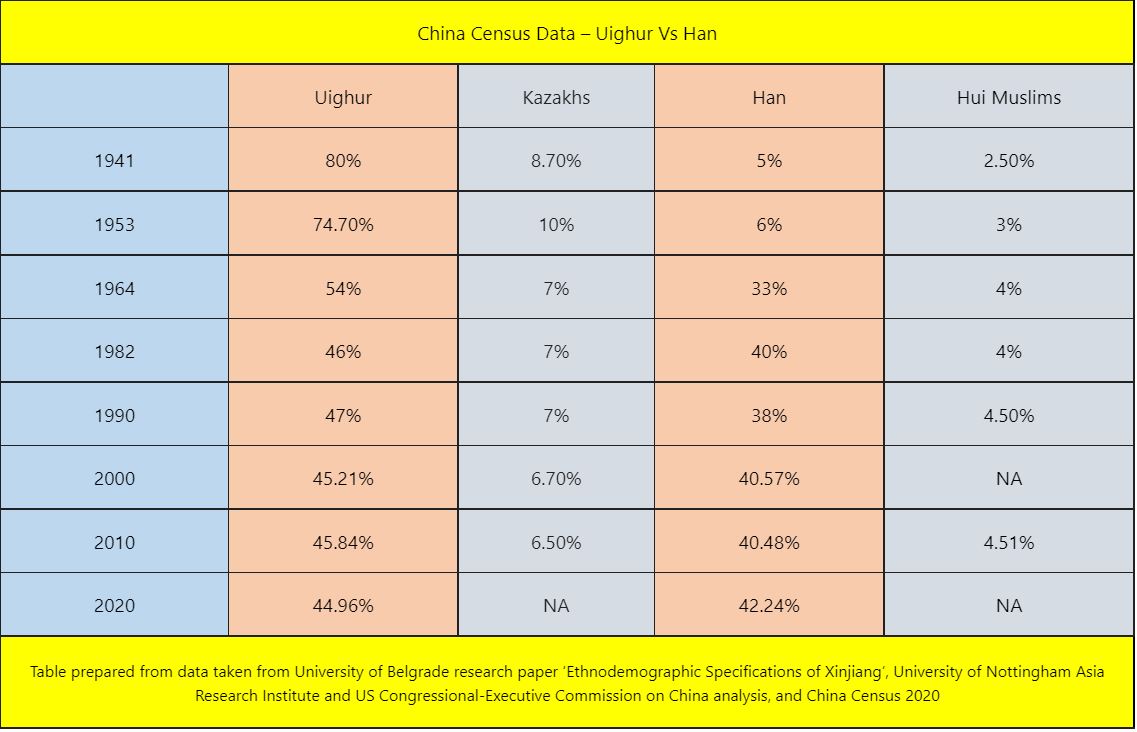 The table above shows how the share of the ethnic minorities including Uighurs have decreased over the years with China settling Han Chinese from across the country to the province that was once an independent land.

Xi Jinping’s leadership has increased the pace of migration, or transferring Han Chinese, to a greater level. Xinjiang’s regional government released the 2020 Chinese Census data recently that says the last 10 years in Xinjiang saw Han Chinese population increasing by around 25%, i.e., 9% more than the growth of the Uighur population in the same period.

China’s state-owed the Xinjiang Production and Construction Corps (XPCC) makes agricultural settlements in the region. According to a Reuters reports from 2014, 88% of these settlements are from Han migrants only.

Apart from guarding China’s border and security affairs, and running mining and construction services, XPCC also controls the industries that are supposed to be mainstay for the economic survival of the ethnic migrants like cotton and tomato production and other agriculture activities. Xinjiang produces 20% of the cotton of the world but the cotton industry is not run by the native population base like Uighurs and are controlled by the Han Chinese migrants.

Han Chinese workers dominate both the low tech and high tech industries in the territory. Most of the jobs that ideally should go the native population base of the province are reserved for the migrant workers. Xinjiang is an energy hub for China for its coal, gas and crude oil reserves but most of the job opportunities in the sector are closed for Uighurs, add the Reuters report. To sum up, migrant Han Chinese, pushed by China, are much wealthier than Uighurs in the province.

Xi Jinping’s call in 2015 – sinicise Islam, the religion followed by the ethnic Uighurs. And China has scale up the process since then to wipe out traditional Islamic rituals being practiced. China may say sinicisation of religion means making it compatible with socialist core values but it has been a disguise to impose Chinese culture on a different religion.

And China has a grand agenda – sinicise Uighur’s Islam in five years. The cycle of oppression is in motion since 2018 and 2022 is the final goal.

China has banned most Islamic religious practices. Uighurs cannot keep Ramadan fast. They cannot eat Halal food. Uighurs were forced to eat pork during a Chinese festival, says a report from the US-funded Radio Free Asia, while eating pork is strictly prohibited in Islam. Uighurs are not allowed to name their children with religious words like Muhammad or Islam or Jihad or Quran or Mecca.

Another big shock to the religious practices to the Uighurs is the massive destruction of their religious places under Xi’s hardliner policy. According to a report from Radio Free Asia, Chinese authorities have so far destroyed 70% mosques in the region. Another report, using geo-location technique, from the Washington-based Uighur Human Rights Project (UHRP) says China destroyed 10,000 to 15,000 Uighur mosques and religious places between 2016 and 2019.

An investigative report from Australian Strategic Policy Institute (ASPI), using satellite imagery and night-time satellite imagery, says 65% or 16,000 mosques in the region are either totally destroyed or significantly damaged. ASPI report further adds that since 2017, “30% of important Islamic cultural sites (sacred shrines, cemeteries and pilgrimage routes) have been demolished, with an additional 28% damaged or altered in some way”.

China is forcing the reproductive age Uighur women to go through stringent birth control measures including drug use and sterilisations. An investigative research study by Adrian Zenz, a German researcher, says birth-control violation is a major factor in the extrajudicial internment of Uighurs. China had planned to sterilize 80% women of childbearing age in four Uighur dominated minority areas by 2019.

According to an investigation by the Associated Press, while the use of intrauterine device (IUD) to prevent pregnancy fell sharply in China, it witnessed a massive increase in Xinjiang. Zenz’s research says, in 2018, 80% of China’s IUD placements happened in Xinjiang, a province that contains just 1.8% of China’s total population. The sterilization surgery saw seven-fold rise in Xinjiang’s Uighur dominated areas while its rate nationally came down.

Between 2018 and 2019, the birth rate in Xinjiang declined by 24% in 2019 while nationally it saw a decline of just 4.2%. It saw a sharp decline in ethnic minority regions, in the range of 30 to 56%. Zenz’s analysis says China plans to cut up to 4.5 million Uighur and other ethnic minorities births, means it may reduce their population by one-third in next two decades. A pure genocide in making.

Estimated 2 million Uighurs and other Muslim minorities in mass internment camps, that are also called concentration camps globally, says the U.N. Committee on the Elimination of Racial Discrimination based on the inputs it had. Zenz’s research estimates it to be 1.8 lakh.

But British Daily ‘The Sun’ says the crisis runs even deeper. Quoting a leaked document from Beijing, the newspaper says mass internment camps existed even in 2014 and around eight million Uighur and other Muslim minorities have already been forced through the system. If we go by the report quoted in ‘The Sun’, then over 65% of the Uighur population has always been forced through the concentration camps so far.

6. Use Uighurs as forced labour

Use Uighurs, either in concentration camps or in settlements outside as forced labour. ASPI’s investigative reports says China transferred 80,000 Uighurs out of Xinjiang between 2017 and 2019. But those forced into different industries working in Xinjiang is expected to be much higher.

An investigative report from BuzzFeed says over 1500 Chinese companies are located near or inside Uighur detention camps in Xinjiang. The sole purpose of establishing these works near or inside the concentration camps is to use the Uighurs and other ethnic minorities detained there as workforce.

Xinxiang’s’ cotton industry controlled by migrant Hans rightly depicts this. 20% of total cotton internationally traded is produced by forced labour of Uighur Muslims and other minorities of the region. A BBC report says around half a million Uighur Muslims and minorities are forced each year into cotton fields.