Sri Lanka President Election Updates: Sri Lanka’s newly appointed President Ranil Wickremesinghe said that the country is in a very difficult situation and the government has big challenges ahead

Sri Lanka President Election Updates: Six-time prime minister Ranil Wickremesinghe was elected as crisis-wracked Sri Lanka’s new president by the country’s parliament Wednesday, with the backing of the party of the ex-leader — who fled abroad after his palace was stormed by protesters. Official results showed Wickremesinghe polled 134 votes in a three-cornered parliamentary vote, with his main opponent Read More

India said on Wednesday that it will continue to be supportive of the Sri Lankan people’s quest for stability and economic recovery, through democratic means and values, established democratic institutions and constitutional framework. The statement by the High Commission of India in Colombo comes hours after Sri Lankan Parliament elected seasoned politician Ranil Wickremesinghe as new President to succeed Gotabaya Rajapaksa who fled the country and resigned after a popular uprising against his government for mismanaging the economy.

The Parliament of Sri Lanka, in exercise of the provisions of the Sri Lankan Constitution, has today elected H.E. Mr. Ranil Wickremesinghe as the President of Sri Lanka.

As a close friend and neighbour of Sri Lanka and a fellow democracy, we will continue to be supportive (1/2)

Colombo Fort Magistrate has issued a court order prohibiting anyone from assembling around a 50-metre radius distance of the S.W.R.D. Bandaranaike statue in Colombo

Six-time prime minister Ranil Wickremesinghe was elected as crisis-wracked Sri Lanka’s new president by the country’s parliament Wednesday. “Our divisions are now over,” Wickremesinghe said in a brief acceptance speech in parliament, inviting Alahapperuma “to join me and work together to bring the country out of the crisis we are facing”. He said he hoped to be sworn in later Wednesday at a simple ceremony within the tightly guarded parliament building. 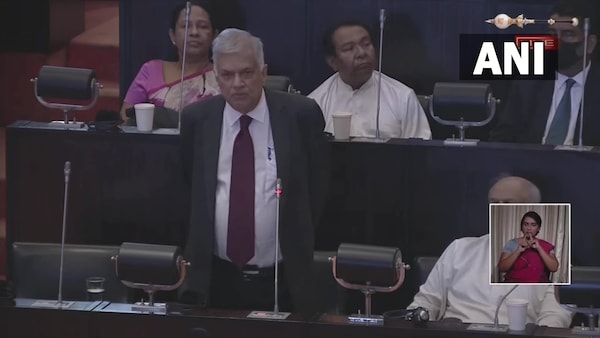 Ranil Wickremesinghe’s rise to power is remarkable. He has ran unsuccessfully for president twice before but secured enough votes among lawmakers despite controlling just one seat – as leader of the United National Party (UNP). His experience in senior government positions, and a reputation as a shrewd operator that earned him the nickname “the fox”, should count in his favour as he seeks a way out of Sri Lanka’s devastating economic crisis. Wickremesinghe has also recently negotiated with the International Monetary Fund (IMF), and enjoys a working relationship with key donor countries including India. Whether he can quell mass protests that led to the ouster of the previous president, Gotabaya Rajapaksa, remains to be seen.

The country is in a very difficult situation, we have big challenges ahead, says Sri Lanka’s newly appointed President Ranil Wickremesinghe.

Counting of Voting for President Concludes

We have seen baseless and purely speculative media reports about efforts at political level from India to influence political leaders in Sri Lanka regarding elections in the Sri Lankan Parliament to the the post of the President of Sri Lanka.

Candidate Can be Present During Counting or Appoint Representative: Sri Lankan Secy-General

If any candidate desires to be present at the counting of votes he may do so or if he wishes to appoint another member to represent him at the counting to be informed to the returning officer after obtaining the consent of that member, Sri Lankan Secy-General announces to the House.

Counting of Votes Underway for President in Sri Lanka's Parliament

GRAPHICS | All You Need to Know About Sri Lanka Presidential Candidates 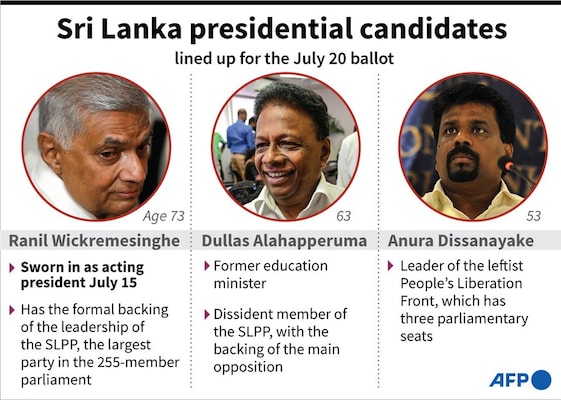 Voting for the Sri Lankan Presidential election underway in Colombo

Lanka Rumble: Kingmaker Premadasa Packs a Punch. Can He Knock Out Both Ranil and Rajapaksa?

Sometime in June 2019, Prime Minister Narendra Modi travelled to Sri Lanka on a state visit. The then ruling combine of President Maithripala Sirisena and Prime Minister Ranil Wickremesinghe had deputed their housing minister Sajith Premadasa as the visiting Indian PM’s minister-in-waiting. Many newspapers carried photos of Premadasa receiving Modi on the front page, and some speculated with a caption – Sajith: The President-in-Waiting? READ MORE

Counting of Votes Underway for President in Sri Lanka's Parliament

GRAPHICS | All You Need to Know About Sri Lanka Presidential Candidates

Who Are The Candidates for Sri Lanka President's Post?

Security Beefed Up Around Sri Lankan Parliament Ahead of Presidential Election

For the First Time in 44 Years, Sri Lanka's Parliament to Directly Elect President in Three-way Contest

“Our divisions are now over,” Wickremesinghe said in a brief acceptance speech in parliament, inviting Alahapperuma “to join me and work together to bring the country out of the crisis we are facing”. He said he hoped to be sworn in later Wednesday at a simple ceremony within the tightly guarded parliament building.

The 73-year-old takes charge of a bankrupt nation that is in bailout talks with the IMF, with its 22 million people enduring severe shortages of food, fuel and medicine. But he is despised by the protesters who forced his predecessor Gotabaya Rajapaksa from his palace after months of demonstrations over an unprecedented economic crisis as an ally of the former leader.

The Rajapaksas’ Sri Lanka Podujana Peramuna (SLPP) party, the largest in parliament, backed Wickremesinghe for the presidency. Wickremesinghe has pledged to crack down hard if protesters take to the streets and hundreds of heavily armed troops and police stood guard outside the parliament, but there were no signs of demonstrators.

A fuel shortage, rising global food prices and the shock of erratic climate patterns, compounded by crushing policy mistakes and the coronavirus pandemic, have created a crisis with no easy solution. But Sri Lanka might be unique in one thing: The rage at the failure and corruption of a ruling elite has been matched by generosity and ingenuity to prevent complete collapse and anarchy.

Hospitals are still functioning. Sanitation trucks still roam the city’s neat streets, even if less often. The country is increasingly dependent on the goodness of others, donors, lenders — really any person or institution with the funds to help. Earlier, India’s top diplomat had held talks with Sri Lanka’s president and prime minister as New Delhi signalled its willingness to go beyond the USD 4 billion in loans, swaps and aid that it has already provided its cash-strapped neighbour. External Affairs Minister S Jaishankar said that no other country has supported Sri Lanka as India has in terms of food, fuel, medicines and other essentials.

A total of 225 parliamentarians are eligible to vote on Wednesday. If a contender receives more than half of the preferential vote, they win the position outright. It is a three-way contest between Wickremesinghe, Dullas Alahapperuma and Anura Kumara Dissanayake, leader of the left-wing National People’s Power Party.

Analysts say the frontrunner is Ranil Wickremesinghe, a six-time former prime minister who became acting president after his predecessor resigned, but is despised by the protesters who see him as a Rajapaksa ally.

As acting president, Wickremesinghe has extended a state of emergency that gives police and security forces sweeping powers, and last week he ordered troops to evict protesters from state buildings they had occupied.

An opposition MP said Wickremesinghe’s hardline stance against demonstrators was going down well with MPs who had been at the receiving end of mob violence, and most SLPP legislators would side with him. “Ranil is emerging as the law-and-order candidate,” Tamil MP Dharmalingam Sithadthan told AFP.

Wickremesinghe’s main opponent in the vote will be SLPP dissident and former education minister Dullas Alahapperuma, a former journalist who is being supported by the opposition. Alahapperuma pledged this week to form “an actual consensual government for the first time in our history”.

If he wins, the 63-year-old is expected to name opposition leader Sajith Premadasa as his prime minister. Premadasa’s late father Ranasinghe ruled the country with an iron fist in the 1980s, when Alahapperuma was a rights campaigner.

The third candidate is Anura Dissanayake, 53, leader of the leftist People’s Liberation Front (JVP), whose coalition has three parliamentary seats.

Lawmakers will rank the candidates in order of preference in a secret ballot — a mechanism which gives them a freer hand than an open poll, and previous elections have seen allegations of bribes offered and accepted in exchange for votes.

Candidates need more than half the vote to be elected. If no one crosses the threshold on first preferences, the candidate with the lowest support will be eliminated and their votes distributed according to second preferences.

The new leader will be in office for the balance of Rajapaksa’s term, which runs until November 2024.

If Wickremesinghe is confirmed in the post, he is expected to name public administration minister Dinesh Gunawardena, 73, his schoolmate and a strong Rajapaksa loyalist, as the new premier.