"I thought that our transgender community was lagging behind in education and jobs, and they are not strong enough politically," she said. "So I wanted to do something for my community."

Opinions are mixed about the slim 21-year-old who appears regularly on the Kohenoor News channel in Lahore, capital of Pakistan's eastern province of Punjab, but Malik says she has achieved her childhood dream.

"I thought that our transgender community was lagging behind in education and jobs, and they are not strong enough politically," she said. "So I wanted to do something for my community."

Many transgender individuals in Pakistan live in secluded communities and have no choice but to beg on the streets or sing and dance at private parties to earn a living. Some also turn to prostitution to make ends meet.

Malik says she was disowned by her family when she was 16, following years of being forced to dress and act like a boy.

She sought a different route for herself, so she trained and then found work as a makeup artist to fund her journalism degree at Punjab University. Marvia Malik, Pakistan’s transgender news anchor, checks herself in the mirror before a news broadcast at the Kohenoor News channel in Lahore. (Image: Reuters)

Through her connections in the beauty industry, she landed a modeling job and became the talk of the town.

The story of her life, and her demeanour, impressed the selection panel at Kohenoor News, which hired her as a trainee anchor.

Kohenoor Chief Executive Junaid Mehmood Ansari says he had apprehensions about Malik going on air, but his worries were put to rest by social media praise for his efforts to promote transgender people after her first appearance, on March 23.

Recent legislation has made clear that transgender individuals in Pakistan are guaranteed all the citizens' rights enshrined in its constitution, with national identity cards providing for a category of "third gender". 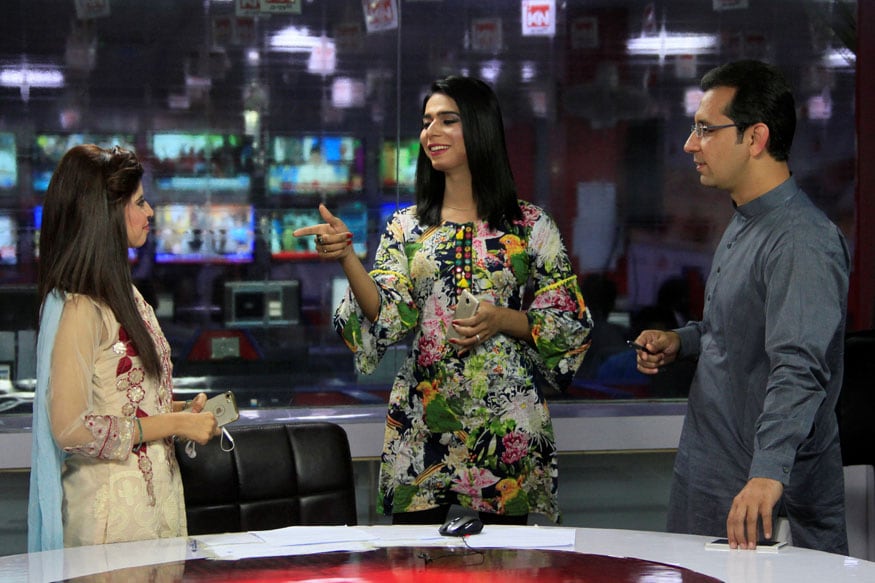 Marvia Malik chats with her colleagues before a news broadcast at the Kohenoor News channel in Lahore. (Image: Reuters)

But not all Pakistanis are so accepting.

"This new transgender thing is the influence of Western culture, and this is totally wrong," said Ayaz Khan, a resident of the southern commercial hub of Karachi.

Trans Action Pakistan, a campaign group, estimates there are at least 500,000 transgender people among Pakistan's population of 208 million.
Tags