President Donald Trump pumps his fist to the crowd with a bandages on his hand, before speaking from the Blue Room Balcony of the White House to a crowd of supporters, Saturday, Oct. 10, 2020, in Washington. (AP Photo/Alex Brandon)

President Donald Trump is running out of time to recover from a series of selfinflicted setbacks that have rattled his base of support and triggered alarm among Republicans who fear the White House is on the verge of being lost to Democrat Joe Biden.

WASHINGTON: President Donald Trump is running out of time to recover from a series of self-inflicted setbacks that have rattled his base of support and triggered alarm among Republicans who fear the White House is on the verge of being lost to Democrat Joe Biden.

The one-two punch of Trumps coronavirus diagnosis and his widely panned debate performance also has Republicans worried they could lose control of the Senate. With just over three weeks until Election Day, Senate races in some reliably red states, including South Carolina and Kansas, are competitive, aided by a surge in Democratic fundraising that has put both the Republican Party and Trumps own campaign at an unexpected financial disadvantage.

The president will aim for a reset this week, hoping an aggressive travel schedule and Judge Amy Coney Barrett’s Supreme Court confirmation hearings will energize his most loyal supporters and shift attention away from a virus that has killed more than 214,000 Americans on his watch.

Optimists in the presidents inner circle point to his unique ability to command attention and to his 2016 campaign, which also seemed destined for defeat before a late shift. But that comeback was aided by outside forces against an unpopular opponent. This year’s campaign, other Republicans worry, may instead resemble 1980 or 2008: a close race until, at the end, it decidedly wasnt. 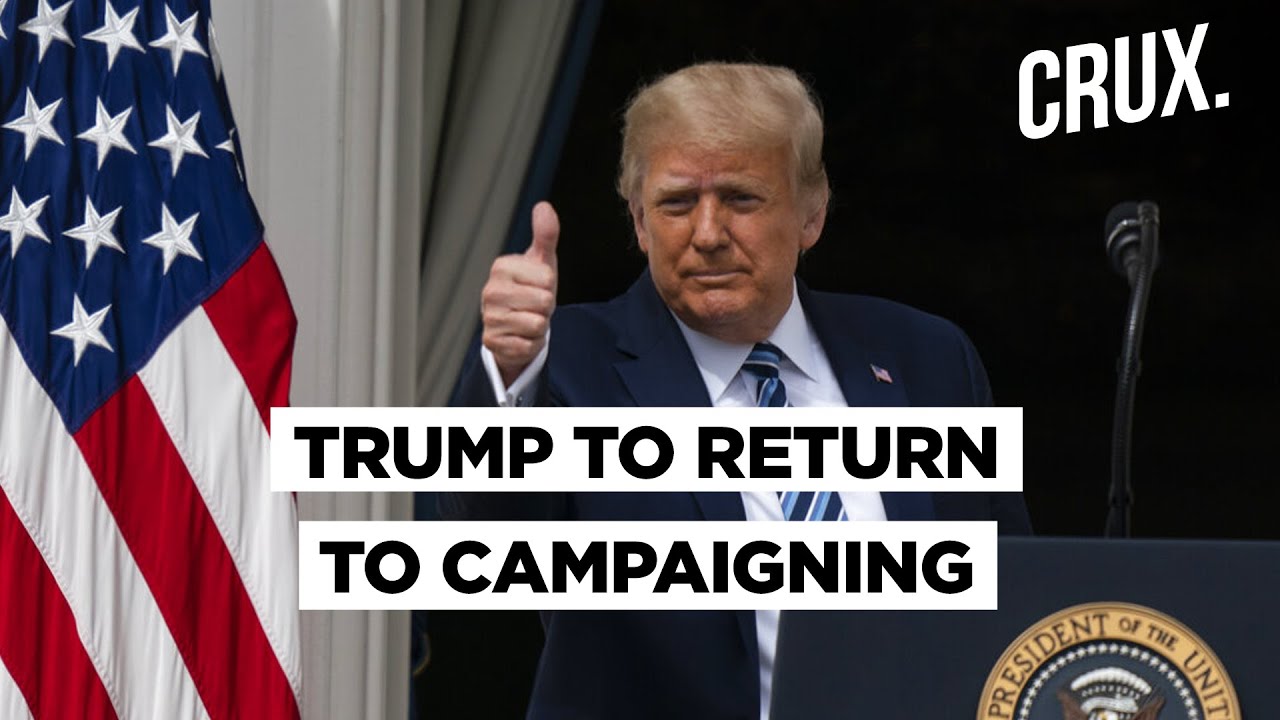 Its not good for my side,” said veteran GOP pollster Whit Ayres. “Pretty obviously, in many ways down-ballot Republicans are in the boat with Donald Trump. Thats good for Republicans in deep-red states, but more problematic for those in swing states.

Asked for any bright spots for the Republican field, Ayres said, Im wracking my brain and just struggling.

This account of Trump’s reelection effort was compiled from interviews with nearly two dozen White House and campaign officials and Republicans close to the West Wing, many of whom were not authorized to publicly discuss private conversations. It describes how a race that has generally been stable for months has endured a series of historic jolts.

The death of Supreme Court Justice Ruth Bader Ginsburg animated conservatives but also electrified Democrats, driving a tsunami of cash toward Biden and down-ballot Democrats. Trumps heavily derided debate performance only exacerbated the problem, as even his own supporters found him rude as he so frequently interrupted Biden.

Reviewing data afterward, campaign aides worried as they started to see Trumps support begin to slip. They saw the presidents coronavirus diagnosis as only compounding the problem, particularly with seniors.

Its not good,” said Alex Conant, a senior campaign adviser to Sen. Marco Rubios 2016 presidential campaign. “Its been a long time since Donald Trump has had any good news, and when he does have good news, he manages to step on it.

The Trump campaign insists the president can win reelection, saying his return to the road will excite his base while claiming that public polling has undercounted their supporters.

But national polls have shown Biden with a significant lead. And while the margins in the battleground states are smaller, Trump has faced stubborn deficits in most of the states that will decide the election.

Sen. Ted Cruz, R-Texas, said Friday if that people are depressed and upset on Election Day, I think we could lose the White House and both houses of Congress, that it could be a bloodbath of Watergate proportions. In November 1974, the first congressional election after the Watergate scandal drove Republican President Richard Nixon from office, Democrats added significantly to their majorities in both houses. They took back the White House in 1976 and added still more seats in Congress.

Trumps campaign worries that it is losing support among suburban voters, women and older voters. The loss of older voters would be especially concerning in states like Florida and Arizona, where aides felt pre-debate Trump had pulled even with or slightly ahead Biden in part due to his improved standing with Latino voters.

Advisers privately concede that Trump, who has not moderated his tone on the virus after getting sick, has little chance of victory without Florida, which will be the site of his first post-diagnosis rally on Monday. And a loss in Arizona would require Trump to hold onto Pennsylvania.

Biden in recent weeks has pushed into states that once were considered safe for Trump, among them Iowa, Georgia and Texas, forcing the president to spend valuable time and resources to play defense. The Democrat on Monday will make his first trip to Ohio of the general election campaign, another state Trump won convincingly in 2016.

Hes in trouble, theres no question. By every traditional measuring stick, this looks like a Biden landslide, said Ari Fleischer, former press secretary for President George W. Bush. Its hard to predict what will happen in Congress, but anytime there is a large-scale victory, it has the potential to create tides to sweep people out.

The fate of the Senate has increasingly weighed on Republicans, who see tough races in Maine, Colorado, Arizona and North Carolina and even worries in deep-red Kansas and South Carolina. Some Trump backers are warning that GOP Senate candidates are now at an inflection point and some, including Sens. John Cornyn of Texas and Martha McSally of Arizona, took small steps to distance themselves from the president in recent days.

Dan Eberhart, a prominent GOP donor and Trump supporter, said there is no doubt that Trumps handling of the pandemic is eroding support for down-ballot Republicans and could lead to a Democratic sweep of government.

I hope the polls have it wrong, Eberhart said. But Republicans … need to develop a campaign strategy committed to protecting the Senate at all costs, even if it means sacrificing the Oval Office.

One significant opportunity to potentially change the trajectory of the race is Barrett’s Senate confirmation hearings this week. Trumps campaign believes the hearings could change the political narrative away from the virus and draw attention to Bidens refusal to say whether he would expand or pack the Supreme Court.

But there has been second-guessing of Trump and campaign senior staff, including Bill Stepien, the campaign manager also ill with COVID-19, for balking at appearing in a remote debate last week. The move, like Trumps impulsive decision to blow up COVID relief talks only to later restart them, was one of several recent episodes that felt less like an effort to win and more about creating excuses for a loss.

And after days of back and forth, only one debate remains, depriving Trump of a free 90 minutes to reach tens of millions of Americans. And that price tag matters.

The Trump campaign has spent more than $1.5 million in the District of Columbia market one of the most liberal in the country but home to the presidents obsessive cable-watching habits since the end of April. That’s more than he has spent in Virginia and New Hampshire and has contributed to the erosion of Trump’s once-massive cash advantage to Biden.

The Democrat is outspending Trump by more than 2-to-1 at a time when the president has largely retreated from advertising in battleground states that helped him win in 2016.

While Bidens campaign and Democrats have booked $172 million in ad time the final three weeks, Trump and the GOP have reserved $92 million, according to the political ad tracker Kantar/CMAG.

Some Trump allies say their best bet is to hope that the results look close election night, before some of the mail-in ballots are counted, allowing Trump to declare victory and have the results thrown to the courts.

The Trump campaign believes the presidents return to the campaign trail will shift the story from COVID and says an economic closing argument 56% of people in a Gallup poll this week said they were better off than four years ago, despite the pandemic will be a winner.

If we believe public media polls, then we would be talking about Hillary Clintons reelection right now, said Tim Murtaugh, the campaigns communications director. The choice in this campaign boils down to this: Who do you trust to restore the economy to greatness, the president who has done it once already and is already doing it again or Joe Biden and his 47-year record in Washington?

Still, Trump is flailing for a final message, turning a spate of recent interviews into tirades about the 2016 election and pushing his attorney general to investigate his political opponents. Newt Gingrich, who believes Trump will win again, warned the president to stop fighting the last war.

He hasnt quite adjusted to the fact that Biden is not Hillary and he has not adjusted that he has been around for five years and not being a fresh face, the Republican former House speaker said. The things that worked against Hillary havent worked against Biden.

While the state of the race looks promising, Democrats know that three weeks add up to an eternity in the age of Trump.

There is an opportunity for a massive Democratic win, but this is still close in some of these states, said Claire McCaskill, a Democratic former senator from Missouri. The fundamentals of the race have not changed. But the reason I am optimistic is that the presidents instincts have never been more wrong.