US Election Exit Poll Results 2020 LIVE Updates: Polls have closed in Georgia and an early exit survey of voters there show around 4 in 5 White voters without a college degree went for Donald Trump.

US Election Exit Poll Results 2020 LIVE Updates: As voting sites closed throughout the United States on Tuesday, exit polls conducted by Edison Research provided some insight on major issues driving the presidential vote and an early read on voter support. Here are some highlights from the poll, which is based on in-person interviews with voters on Tuesday, in-person interviews at early voting centers before Election Day and telephone interviews with people who voted by mail.

In an emerging story on election night, Republican President Donald Trump was showing some surprising strength with Latino voters in key states such as Florida and Texas. In Florida, according to exit polls, Trump and Democratic rival Joe Biden were splitting the Latino vote. In 2016, Trump only won four out of 10 Latino voters in his race against Democratic nominee Hillary Clinton. Overall, he was winning three of 10 nonwhite voters versus winning just two of 10 four years ago.

Trump maintained his advantage among white voters. According to Edison Research exit polls, six in 10 white voters said they cast ballots for Trump, unchanged from 2016. The Trump campaign made winning over Cuban-American voters in populous South Florida a top priority by emphasizing the administration’s hardline policy toward Cuba and Venezuela.

69 percent Muslim voters Cast Ballot for Biden | Nearly 69 per cent Muslim voters cast their ballot for Democratic Presidential nominee Joe Biden while 17 per cent supported President Donald Trump, according to a survey conducted by Muslim civil liberties and advocacy organisation in the US. The Council on American-Islamic Relations (CAIR), the nation's largest Muslim civil rights and advocacy organisation, released the results of its 2020 Muslim Voters Presidential Election Exit Poll on Tuesday.

With Results from Key States Unclear, Trump Declares Victory | Despite incomplete results from several battleground states that could determine the outcome of the U.S. presidential race, President Donald Trump early on Wednesday proclaimed victory over Democratic challenger Joe Biden. "Frankly, we did win," Trump told supporters at the White House. But election results from some battleground states, including Pennsylvania, Wisconsin, Michigan and Georgia, were still not clear and projections from major networks and Edison Research showed Trump still short of the 270 electoral votes need to win re-election.

"We are going to win Pennsylvania. We are winning Michigan and we are winning Wisconsin, which we don't even need. We were not expected to win Florida, we won it big. We won Ohio, Texas and Georgia," Donald Trump said.

Donald Trump is projected to win in 23 states including big prizes Florida and Texas, as well as Indiana, Kentucky, Missouri and Ohio -- all states he won in 2016. Biden has captured 18 states including his home state Delaware and big prizes California and New York, as well as the US capital. As with Trump, so far, all states claimed by Biden were won by Democrat Hillary Clinton in 2016. So far, that gives Biden 223 electoral votes and Trump a maximum of 214, because Nebraska splits its electoral votes based on congressional district.

Not Over Till Every Vote in Counted: Biden | "It's not over till every vote and every ballot is counted. We are Confident about Arizona, that's a turnaround, and we are still in the game in Georgia," Joe Biden said during an address as the counting of the US presidential polls is underway.

Democrat Joe Biden will speak shortly on the election results, as many of his key states remain too close to call. The Biden campaign gathered the press pool that covers him in Wilmington, Delaware, for an early Wednesday morning statement but offered no further guidance. Biden has spent the night watching the returns come in from his home, while reporters waited near the Chase Center in downtown Wilmington for potential remarks.

Trump wins Ohio which has 18 seats while Biden wins Virginia which has 13 seats. Biden has 205 electoral votes, and Trump has 114 votes.

Progressive AOC Easily Wins Second House Term | New York progressive Alexandria Ocasio-Cortez comfortably secured a second term in Congress with an expected win over her Republican challenger who was outspent despite raising $10 million. John Cummings, 60, hoped fundraising from conservative donors nationwide could propel him past one of the left's most popular stars, but the former police officer and high school teacher was no match for the charismatic 31-year-old representative of parts of the Bronx and Queens.

US media is projecting wins for Donald Trump so far in 17 states including Indiana, Kentucky, Missouri, Oklahoma and Tennessee -- all states he won in 2016. Biden has captured 16 states including his home state Delaware and big prizes California and New York, as well as the US capital. As with Trump, so far, all states claimed by Biden were won by Democrat Hillary Clinton in 2016. So far, that gives Biden 209 electoral votes and Trump a maximum of 116, because Nebraska splits its electoral votes based on congressional district.

READ | Republicans Hold Texas in Battle for US Senate, 13 Hotly Contested Races Yet to be Called 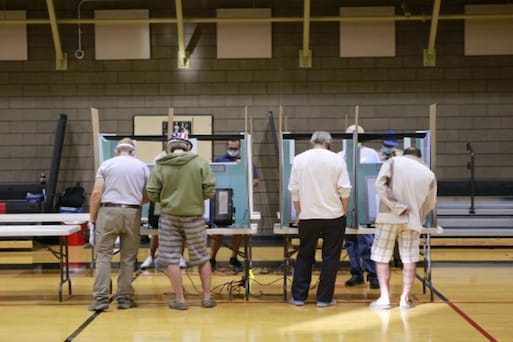 Texas, once a Republican stronghold, has grown increasingly competitive in recent years as the population has grown more diverse and Donald Trump's polarizing presidency has alienated suburban women.


President Donald Trump has won the state of Missouri which has 10 electoral votes, Nebraska with 5 votes, Utah with 6 votes, Kansas with 6 votes and Louisiana with 8 votes.

UPDATE | US media has projected wins for Donald Trump so far in 14 states including Indiana, Kentucky, Oklahoma, Tennessee and West Virginia -- all states he won in 2016. Biden has captured 12 states including his home state Delaware and big prize New York, plus the US capital Washington. As with Trump, so far, all states claimed by Biden were won by Democrat Hillary Clinton in 2016. So far, that gives Biden 131 electoral votes and Trump 95. The magic number is 270.

Republicans May Challenge Absentee Ballots in Pennsylvania | Republicans are keeping their legal options open to challenge absentee ballots in Pennsylvania if the battleground state could swing President Donald Trump's reelection. A top Democratic lawyer says the suits are meant to sow doubt about the results and lack merit. Two federal lawsuits aim to prevent absentee votes from being counted. Rear more:

Democrat Sarah McBride Becomes Transgender State Senator | First Democrat Sarah McBride won a state Senate race and would become the first openly transgender state senator in the country when sworn in. McBride defeated Republican Steve Washington to win the seat that became open following the retirement of the longest-serving legislator in Delaware history. She won in a heavily Democratic district stretching from northern Wilmington to the Pennsylvania border, and joins several other transgender legislators around the country but will be the first transgender state senator.

Share markets turned skittish and S&P futures wobbled on Wednesday as results from the US presidential election showed an agonisingly close race with no clear winner yet in sight. Investors had initially wagered that a possible Democratic sweep by Joe Biden could ease political risk while promising a huge boost to fiscal stimulus, hitting the safe-haven dollar and bonds.

Trump Support Eroding Among Older Voters | President Donald Trump appears to have lost some support among white men and older people in Georgia and Virginia, key parts of the Republican's voter base, according to Edison polls. While Trump is still winning the majority of those voters, some of them switched to supporting his Democratic opponent, former Vice President Joe Biden, the exit polls showed. Edison’s polls showed Trump winning seven in 10 white men in Georgia, which is down from an eight in 10 advantage over Democratic nominee Hillary Clinton in 2016. And while Trump is winning six in 10 voters who are at least 65 years old in Georgia, that is down from a seven in 10 four years ago.

Gold Retreats on Firm Dollar Amid US Poll Results | Gold retreated in Asian trade on Wednesday as the dollar strengthened after early voting results showed a close contest between President Donald Trump and Democratic rival Joe Biden in the US Presidential election. Spot gold was down 0.4% at $1,901.72 per ounce by 0211 GMT, having fallen 1% earlier in the session. US gold futures were 0.4% lower at $1,902.20.

Democrats Hope to Win Control in Senate | As well as the US presidency, Democrats hope to win control of the Senate, where Republicans currently hold a majority of 53 seats in the 100-seat chamber. The battle spans 14 competitive races, though the final outcome may not be clear for some time. That could lead to a new era in US politics, if the party also captures the White House and holds onto the US House of Representatives.

Voters take selfies near the Michael Jordan statue on Election Day, on November 3, 2020, in the atrium of the United Center, transformed into a super voting site in Chicago. (AP Photo/Charles Rex Arbogast)

In Texas, four in 10 Hispanics voted for Trump, up from three in 10 in 2016, according to exit polls in that state. Edison’s national exit poll showed that while Biden led Trump among nonwhite voters, Trump had received a slightly higher proportion of the nonwhite vote than he did in 2016. The poll showed that about 11% of African Americans, 31% of Hispanics and 30% of Asian Americans voted for Trump, up 3 percentage points from 2016 among all three groups.

Trump may need his improved performance with nonwhite voters to offset losses within his traditional political base. He appears to have lost support among white men and older people in Georgia and Virginia, key parts of the Republican’s voter base, according to Edison polls.

While Trump is still winning the majority of those voters, some of them switched to supporting Biden, the exit polls showed. Edison’s polls showed Trump winning seven in 10 white men in Georgia, down from an eight-in-10 advantage over Clinton in 2016. While Trump is winning six in 10 voters who are at least 65 years old in Georgia, that is down from seven in 10 four years ago.

In more encouraging news for the president, Trump was winning six in 10 voters in Virginia who have an income of $100,000 or more. The national Edison Research poll results revealed deep concern about the coronavirus pandemic that has infected more than 9.4 million people in the United States this year and killed more than 230,000.

While only two of 10 voters nationally said COVID-19 was the issue that mattered most in their choice for president, half of U.S. voters believe it is more important to contain the coronavirus even if it hurts the economy.

Trump has made the full opening of the U.S. economy a centerpiece of his re-election campaign, even as infections continue to rise. Biden has claimed Trump is undeserving of a second term because of his handling of the pandemic.

Six of 10 said the pandemic had created at least a moderate financial hardship. Seven in 10 said wearing a face mask in public was a “public health responsibility” versus three in 10 who saw it as a personal choice.

Other issues that were top of mind for voters included the economy, racial inequality, crime and safety, and healthcare policy. Edison compiles exit polls and live election results for the National Election Pool media consortium.